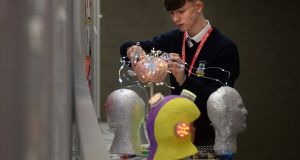 Mental well-being and the impact of social media on the lives of young people dominated social and behavioural projects at this year’s BT Young Scientist & Technology Exhibition and were a favourite among thousands of younger visitors to Dublin’s RDS.

Typical in that category was a project by cousins Catriona and Amy O’Halloran of Coláiste Nano Nagle in Limerick. The dominance of social media in the lives of second-level students prompted them to investigate the prevalence of the social anxiety phenomenon known as “fear of missing out (FOMO)”.

Through the school’s health and wellbeing programme and personal stories, they became aware of its detrimental impact. They surveyed 225 fellow students on their awareness of FOMO, on how long they spent online each day, and their experience of posts that hurt someone else.

They found girls were much more likely to express their emotions online, especially if upset. “They are most likely to be affected by FOMO,” explained Catriona.

They recommended that students gradually detox on smartphone use and appreciate more the people around them. “We found that vulnerable social media users are more at risk of social anxiety, when they don’t understand social media may not be a true reflection of life,” Caitriona said.

Sometimes the simplest of actions can help young people deal with the considerable demands of life. That was the conclusion of second year student Jack Kennedy of Coláiste Mhuire Co-Ed in Thurles, Co Tipperary, after he demonstrated “the power of positive thoughts”.

Motivated by suicide within his community and concern about mental health among young people, he tested the effectiveness of fellow students noting “three good things” about their lives in a school log-book every week. Deputy principal Clare Wallace had highlighted the issue in class.

He conducted two surveys, six weeks apart, on first year students and was struck by indications of improvement in their mental health. He said his research was striking in revealing mood; degree of happiness, boredom levels and the extent to which someone might feel cut-off from the world.

Other consequences were that participating students felt closer to their friends and family, were better able to “know and express their own emotions and felt time passed quicker in school”.

“I was surprised how effective it was. It is very simple but very effective.” Kennedy hopes the practice might be extended to the whole school and conducted over a year.

Under the guidance of their science teacher Orla Condren, they developed their own UVC photometer to measure caffeine deploying an LED light. They used a technique known as solvent extraction to extract the caffeine. They discovered that one product, while being sugar-free, had a much higher caffeine content compared to its standard version.

Caffeine content is a big talking point and concern to young people, Ní Shuilleabháin said, “but often they don’t know how much caffeine is present. Sometimes it’s not given on the can, sometimes you have to go to a website.”

Their device could be built at a cost of €200, compared to several thousand euros for a standard photometer. It would be ideal to be part of a transition year project, they suggested, or in a science club as it enabled “a different kind of learning” and helped students to be better informed about their health.