A ‘traffic jam’ that puts the brakes on protein production 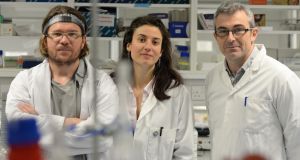 Congratulations, you have just had a study published in the journal Nature – what was that work about?

My lab is interested in how we make proteins inside our cells. You can’t see these tiny molecules but they play lots of roles in the body. The information for these proteins is in your DNA, these are the genes, and this information gets copied into molecules called messenger RNAs or mRNAs. Then a structure called the ribosome moves along the mRNA “reading” its information and it builds the protein. In our study we worked out a mechanism that limits the number of times a single mRNA can be used to make a protein.

So the molecule of mRNA can ‘keep track’ of how many copies of a protein have been made from it? How?

We analysed publicly available data and saw this unusual pattern in AMD1 mRNA. It was quite a puzzle to work out what was going on, but eventually we figured out a mechanism that we were able to test experimentally.

Normally when the ribosome moves along the mRNA reading its information, the ribosome breaks off at a certain point when its job is done. But we found that sometimes the ribosome continued and stopped at a specific position. Several such ribosomes create a “traffic jam” and form a queue. We think that when the mRNA has been used to translate lots of proteins, the queue gets so long that it propagates to the main part of mRNA, stopping it from working. You can see a simulation of the process at https://lapti.ucc.ie/images/AMD1simulation.gif.

Very interesting – so could we use this to make cells stop overproducing a protein that we only want present in limited amounts?

For now, we need to work out more about what is going on and to see whether this happens in other genes too. But it may be that in the future we could engineer mRNA to have this kind of “brake” mechanism if we wanted to put it into cells to make a limited amount of a particular protein, maybe a medicine.

How did you come to work in Ireland?

I grew up in a small town in Russia that is about a third of the size of Cork. I studied in Moscow and worked in Germany and then in the USA, where Prof John Atkins was my supervisor. When John moved back to Cork I started to visit here, and in 2007 I moved to UCC to set up my own lab.

What do you see as the ups and downs of being a researcher?

It requires hard work, and you have to be prepared for failures when ideas or experiments don’t work out. But I think that makes the successes all the sweeter.

What do you like to do to get a break from the lab?

I am not sure I ever stop thinking about research at some level – even when I am watching a movie or out with friends my sub-conscious is working, and often I will have great ideas or figure out how to solve problems when I am out in those social settings. I took up running when I came to Ireland and since then I have completed five marathons. I listen to audiobooks as I run. I’m currently listening to Behave – The Biology of Humans at our Best and Worst by Robert Sapolsky.