Quantum gravity and the small matter of a theory of everything

Quantum gravity is about the structure of matter, space and time on all scales, from quarks and atoms, to stars, galaxies, and black holes, but is it the holy grail of physics? 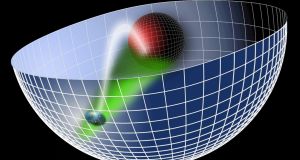 A graphic representation of proton in anti de-Sitter (AdS) space, which forms part of the AdS/CFT correspondence, aiming to unite string theory with quantum field theory 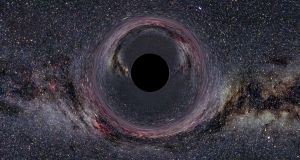 A simulated black hole with the Milky Way in the background

The detection of gravitational waves in 2015, caused by the merging of a pair of black holes 1.4 billion light years away, reminded us of the strength of Einstein’s theory of general relativity, which had predicted them 100 years prior. But the discovery also reminded us that relativity – which is a theory of the universe at the scale of planets, stars and galaxies – is not yet successfully coupled with the quantum world of the very small, in a unified “theory of everything”.

But over the past few decades an idea known as quantum gravity has aimed to do exactly that, and some physicists now think they are well on their way to revealing that holy grail of modern physics. At Trinity College Dublin’s School of Mathematics, research led by Dr Tristan McLoughlin is under way, aiming to investigate the finer aspects of the idea. But why is the unified theory needed?

This would be the theory of quantum gravity. The ideas behind this theory are laid out by much-acclaimed physicist Carlo Rovelli in his latest book Reality Is Not What It Seems. Quantum gravity is about the structure of matter, space and time on all scales, from quarks and atoms, to stars, galaxies, and black holes. In the theory, space and time – the stuff of gravity itself – are quantized, indivisible at a certain fundamental scale, in a similar way in which quantum mechanics is formulated.

“One particular framework for studying quantum gravity, which has already proven fruitful, is M-theory, which includes string theory in particular limits,” says McLoughlin. “M-theory provides a quantum description of gravity.

“However there are a number of gaps in our current understanding,” he says. “For example, how can we relate the theory to the world we see around us? We also lack a general definition of M-theory, only knowing how to describe it in special cases.”

McLoughlin explains that one of the important insights from string theory and M-theory is that ideas which appear to describe completely different physics can in fact be mathematically equivalent. That is to say they are “dual” to each other. One of the most important dualities is called the AdS/CFT correspondence (the anti-de Sitter/conformal field theory correspondence), which is a proposed relationship between two theories: on the one hand quantum gravity, formulated on M and string theory, and on the other hand, quantum field theories which themselves aim to describe elementary particles.

“In its most famous realisation, the AdS/CFT correspondence conjectures that string theory on a particular curved 10-dimensional space is exactly equivalent to a specific quantum theory in four dimensions,” says McLoughlin.

“But while the AdS/CFT correspondence does not describe gravity in our universe,” he says, “it does share many features with it. This helps to generate theoretical models where we can precisely study general aspects of quantum gravity.”

Maybe we have it all wrong

However, Prof Brian Dolan at the Department of Theoretical Physics, NUI Maynooth, is quick to point out that there is not yet any set agreement on what a theory of quantum gravity should look like, or even on the exact problem it is trying to solve.

“There is no accepted theory of quantum gravity,” he says. “There are currently a number of contenders, and by far the most popular is superstring theory. Many physicists find superstring theory compelling due to its internal elegance, but despite decades of intense research it has not produced a single experimentally testable result.”

In fact, Dolan does not believe that there is a “theory of everything” at all. “There is no one size fits all,” he says. “Mathematics has been astoundingly successful in describing the natural world, particularly in physics, but a mathematical model is just that – a model. Never confuse a model with reality.”

He suspects that trying to unite general relativity and quantum mechanics may be the wrong way to go, and that any future breakthrough may come from a completely unexpected direction; perhaps from some young mind with a fresh perspective.

“We are probably asking the wrong questions at the moment,” he says. “Nevertheless it is impossible to resist the temptation to try. After all, the other fundamental forces – except gravity – fit very neatly with quantum mechanics.”

Something is still missing.

Serious developments: Reality is not what it seems, and time does not exist

In Carlo Rovelli’s notable book Reality Is Not What It Seems, he looks closely at the nature of time itself. In fact, Rovelli uses the theory of quantum gravity, to which he has dedicated his life, to suggest that time does not exist at all.

He explains that time is an apparent quantity, derived from our human experience of the world, and points out that in the equations of quantum loop gravity – his specific topic – the time terms cancel out, meaning the concept of “no time” has its foundation in strong mathematics.

“We must not think of time as if there were a great cosmic clock that marks the life of the universe,” he writes. “We have known for more than a century that we must think of time instead as a localised phenomenon: every object in the universe has its own time running, at a pace determined by the local gravitational field.”

“But even this notion of a localised time no longer works when we take the quantum nature of the gravitational field into account. Quantum events are no longer ordered by the passage of time at the Planck scale. Time, in a sense, ceases to exist.”

This can sound like a kind of philosophy, but is really a developing paradigm in physics, and is taken very seriously. There is only now.