In the age of satellites and drones, the old-fashioned weather balloon is making a comeback, as meteorologists realise it is still the best way to get right inside a storm 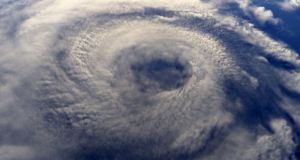 ‘Weather balloons are the only technology we have to get a sample of what’s actually happening inside a storm.’ Image: iStock

In a time when satellites, advanced computer modelling and drones are all anyone wants to chat about at their local meteorological salon, the humble weather balloon is making a surprising comeback. Scientists have come to realise this six-decade-old technology is still one of the best and most accurate (not to mention cheapest) tools for collecting real-time weather and air-quality data.

Innovation tends to follow a trajectory which heads in only one direction: forwards. In so doing, new technologies tend to render obsolete all that came before them.

So it is not only unusual but somehow oddly satisfying to learn that an old method is still proving more reliable, efficient and accurate than its more advanced technological contemporaries.

Weather balloons are used not only for weather measurement purposes, but also to profile atmospheric ozone levels.

“Depending on the size of the balloon and requirements, scientists have been able to make a variety of atmospheric measurements to study weather, air-quality, radioactivity, geomagnetism, astronomy etc up to an altitude of 50km,” explains Dr Saji Varghese, head of the research and applications division with Met Éireann, the Irish meteorological service.

“Certainly there is renewed interest among the scientific community to use advanced balloon technologies for various Earth science applications as an alternative to satellite launches.”

There have been a number of extreme weather events in recent months. Hurricane Harvey in Texas; Hurricane Maria in Puerto Rico and even the non-tropical Hurricane Ophelia, which hit Ireland in October 2017, killing three people, were all reasons for meteorologists around the world to take a closer look at the tools available to them for weather prediction.

“As seen with Harvey and Maria, the ability to track and to predict tropical storm and hurricane movement may have sharpened, but nature is still unpredictable and a storm’s pathway can turn in an instant,” explains Dr Gary Morris, resident meteorological expert and weather balloon aficionado at St Edward’s University in Austin, Texas.

“Unlike satellite data that infers climate conditions, balloon data is the only weather data available that samples the air mass itself. Scientists and engineers often use radiosonde data to improve satellite data and to validate models to see how closely the models agree with the air mass measurements, making weather predictions more accurate.”

A radiosonde is a telemetry tool sent into the atmosphere which can collect data on numerous atmospheric conditions. It uses radio to transmit the info it gathers to a ground receiver down below. Modern radiosondes can provide data on altitude, temperature, pressure, wind, humidity and even cosmic ray readings.

The best mode of transport for a radiosonde is, you guessed it, the humble weather balloon. “When tropical storm Harvey threatened the people of the Houston area and beyond, my research team at St Edward’s University, along with faculty and students from the University of Houston, launched 13 weather balloons in the Austin and Houston area over a three-day period of the storm,” says Morris. “These weather balloons provided critical, real-time weather [radiosonde] data to four national weather services.”

One might be forgiven for thinking a balloon wouldn’t stand much chance when faced with a tropical storm as powerful as the one which hit Texas in late August. But the alternative is sending the same equipment into the atmosphere by aircraft – and you’re not likely to find too many pilots willing to fly in such conditions.

“Certainly it is more challenging to launch a balloon in a hurricane than during normal weather conditions,” says Morris. “All you can do is find a suitable, wide open space, put a little extra helium in the balloon and hope it gets off the ground. Then, for the initial minute or two, hold your breath.”

Given the advancements in satellite technology, how is it that weather balloons can still even compete?

“Satellite data is derived through a process of retrieval,” says Morris. “They record a spectrum of light seen from space and from that spectrum you infer profiles of temperature and concentrations of water vapour etc. Satellites give us real-time global data, but weather balloons are the only technology we have to get a sample of what’s actually happening inside a storm. There’s no greater vantage point.”

Meteorologists in Ireland did not launch any balloons during Hurricane Ophelia but they are used regularly for a variety of atmospheric data-collecting operations. Weather balloons are launched a couple of times a month at Met Éireann’s Valentia geophysical and meteorological observatory in Caherciveen, Co Kerry.

“At Caherciveen we have an automated balloon launching system,” says Varghese. “Without manual intervention, the system is capable of filling balloons with helium gas, launching the radiosondes and collecting and disseminating data to different stakeholders.”

What’s the forecast for weather prediction?

We are not likely to ever be (ethically) in a position to control weather patterns. So the most meteorologists can hope for is improving their ability to predict what to expect.

Key to this is finding the most accurate ways to represent the initial state of the atmosphere. This is done by obtaining data from air mass samples and then assimilating that data into numerical weather prediction models (NWP).

It’s difficult to be absolutely sure that the representation of the state of the atmosphere from an NWP model is accurate. So atmospheric scientists have devised a method called Ensemble Prediction System (EPS). “This method uses several different possible states of atmosphere as initial condition, and the NWP model is run as many times as possible,” says Varghese. “The results from these model runs gives us the probability of a weather event occurring. Met Éireann will be implementing such a system towards the end of next year.”

In the future, NWP models coupled with improvements in physics, dynamics and numerical methods will use even higher spatial resolution (grid spacing) from the current 2 to 3km to 1km or even less.