Help scientists understand the influence of light on the environment 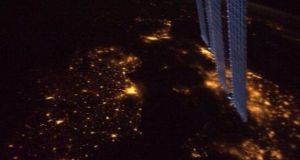 Ireland by night as seen from the window of the International Space Station.

Our modern society depends on light in many forms; from high intensity natural daylight and artificial lighting, to the glow of TV screens, computers, tablets, smartphones, and games.

Light is so ubiquitous - and generally travels unseen, except, for instance, in fog, - that we often take it for granted. Over the past few decades, however, our use of energy for lighting has been increasing and, hand-in-hand with this, science has realised that light has a significant influence on our health. Think seasonal affective disorder (SAD) and how plants, animals, and insects are affected.

In the questionnaire here, scientists are asking for your help to perform the first-ever survey of night-time lighting in Ireland, the results of which will provide important data for studies of the prevalence and influence of light on the environment.

Take the Light at Night survey

Prior to the introduction of electric lighting in the second half of the 19th century, the natural night-time environment was relatively undisturbed by artificial light. Since then, the spread of lighting has been continuous in both amount and intensity.

In Ireland, light emission has nearly doubled since 1990, as can be seen in the pinkish glow observed over our towns and cities, particularly when overcast. The push to reduce our energy and carbon emissions has led to a continuing roll-out of more energy-efficient LED lighting across the private, commercial, and public areas.

Done properly, this could reduce both energy and carbon use. With every development, however, there is a possibility that cheaper energy will lead to increased consumption. To monitor current light levels and their impact, scientists from a number of Irish institutions, including the School of Physics, Trinity College Dublin, University College Dublin, and Maynooth University, as well as Georgia MacMillan of the Mayo Dark Skies group, are looking for your help to determine the amount and type of lighting in our environment, how it affects both sleep patterns and the natural environment, and our attitudes to night-time activities.

Citizen Science initiative: This article is part of a citizen science initiative led by Trinity College Dublin and The Irish Times and is supported by the Environmental Protection Agency and Science Foundation Ireland through its Discover Programme. Feedback, suggestions and questions are welcome at info@citizenscience.ie