Unusual weather leads to ‘devastating event’ for colony of more than 36,000 in Antarctica 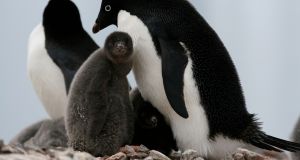 Extensive sea ice late in the summer meant the Adélie penguins had to travel further for food and all but two chicks starved. Photograph: WWF/PA Wire

A colony of more than 18,000 pairs of Adélie penguins in Antarctica suffered a catastrophic breeding season with just two chicks surviving, experts have said.

The disaster for the colony in Terre Adélie in East Antarctica was down to unusually extensive sea ice late in the summer – despite low ice early in the season – which meant penguins had to travel further for food and the chicks starved.

In the wake of the “devastating” event, conservation group World Wide Fund for Nature (WWF) is calling for greater protection for the waters off East Antarctica to ensure penguins do not face added pressure of competition from fishing fleets for their main food source of krill.

The Commission for the Conservation of Antarctic Marine Living Resources (CCAMLR), made up 25 member states and the EU, are meeting on Monday to consider a proposal for a new marine protected area for the waters off East Antarctica.

A marine protected area, which would prevent krill fishing, would help to secure a future for the wildlife of East Antarctica, including Adélie and emperor penguins, WWF said.

Adélie penguins are generally faring well in East Antarctica, but declining in the Antarctic peninsula region where climate change is already established, the conservation group said.

But the same colony which failed to breed chicks this year, failed to produce a single chick four years ago from 20,196 adult pairs, with heavy sea ice combining with unusually warm weather and rain followed by a drop in temperature leaving many chicks saturated and freezing to death.

WWF has been supporting penguin research by French scientists working for the French National Centre for Scientific Research (CNRS) in the region since 2010.

Rod Downie, head of polar programmes at WWF said: “Adélie penguins are one of the hardiest and most amazing animals on our planet.

“This devastating event contrasts with the Disney image that many people might have of penguins. It’s more like Tarantino does Happy Feet, with dead penguin chicks strewn across a beach in Adélie Land.

“The risk of opening up this area to exploratory krill fisheries, which would compete with the Adélie penguins for food as they recover from two catastrophic breeding failures in four years, is unthinkable.

“So CCAMLR needs to act now by adopting a new Marine Protected Area for the waters off East Antarctica, to protect the home of the penguins.”

Yan Ropert-Coudert, senior penguin scientist at the CNRS who leads the Adélie penguin programme at Dumont D’Urville research station adjacent to the colony, said: “The region is impacted by environmental changes that are linked to the breakup of the Mertz glacier since 2010.

“A marine protected area will not remedy these changes but it could prevent further impacts that direct anthropogenic pressures, such as tourism and proposed fisheries, could bring.”