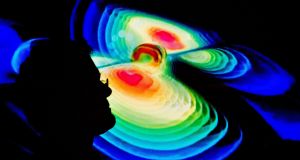 The silhouette of a scientist against a visualisation of gravitational waves. Photograph: Julian Stratenschulte/EPA

Three US scientists whose search for elusive ripples in space-time led to the first detection of gravitational waves have been awarded the Nobel Prize in Physics.

The historic announcement in February 2016 that tremors in the very fabric of reality had been traced to the titanic collision of two black holes was widely tipped to be a Nobel Prize winner.

Two huge L-shaped detectors in the US that together comprise Ligo, the Laser Interferometer Gravitational-Wave Observatory, measured the infinitesimally small echo of the black holes crashing together and merging 1.3 billion light years away.

Not only did the discovery, made in September 2015, confirm a prediction made by Albert Einstein 100 years ago, it also opened up a new window on the universe that promised to change astronomy and physics for ever.

The citation from the Royal Swedish Academy of Sciences read: “For decisive contributions to the Ligo detector and the observation of gravitational waves.”

Prof Weiss said he would be very pleased if he could tell Einstein his team had seen the faint waves and detected black holes, “which [Einstein] was very sceptical about and that was, in fact, the very first thing we detected”.

Mr Weiss also said the win affirmed the importance of the scientific process at a worrying time “when rational reasoning associated with evidence isn’t universally accepted”.

Mr Thorne said the award was “a win for the human race as a whole”.

He added he was a “little disappointed” that thousands of other scientists who have worked on the project did not get to share the prize, adding: “Nevertheless I’m tremendously pleased to accept this” on their behalf.

Mr Barish, who had set his alarm clock in anticipation of a call from the Nobel panel, also gave a name check to the theory’s proponent, adding it was “a win for Einstein, and a very big one”.

Gravitational waves are generated by the most violent events in the universe, spreading outwards at the speed of light like ripples from a stone thrown in a pond.

Any object they pass through expands and contracts by a minute degree as space vibrates.

Spotting the phenomenon requires measuring this tiny movement, which covers a distance 1,000 times smaller than the width of a proton, the nuclear heart of an atom.

In the mid-1970s, Prof Weiss came up with a gravitational detector design based around interfering laser beams that could overcome the enormous problem of disturbing background noise.

Both he and Prof Thorne were convinced from early on that gravitational waves could be detected. They were at odds with Einstein, who doubted that it would ever be possible.

Prof Thorne made crucial predictions about how to recognise a gravitational wave signal.

The third winning scientist, Prof Barish, took over as Ligo’s second director in 1994 at a time when the experiment was at risk of being dropped. He is largely credited with turning the project around and bringing it to completion.