‘It is about asking simple natural questions, and the answers are not always those that our intuition would guess’ 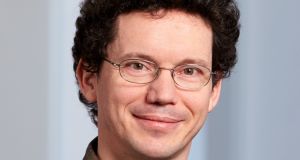 What is happening when water in a pot begins to boil? And what happens when the boiling water turns into steam? Yes, the water is getting hotter but what is exactly is going on when something jumps from solid to liquid, from one state to another?

These are difficult questions for scientists to answer but mathematician Wendelin Werner has found the geometrical maths to provide the answers.

Prof Werner is a professor of mathematics at ETH Zurich in Switzerland. He comes to Dublin on October 16th to deliver a public lecture on his work which tries to model things that cannot easily be modelled.

While the work is highly complex and ground breaking, Prof Werner describes it in disarmingly simple terms. “The mathematics is about asking simple natural questions, and that the answers are not always those that our intuition would guess,” he says.

His work truly is remarkable and sits on the boundary between maths and physics. His maths can describe and help to understand those changes that occur when a substance moves through a phase-change such as melting.

His work was special enough to win him the 2006 Fields Medal, the highest international honour available to a mathematician and which has the standing of a Nobel Prize.

The Fields Medal committee said that Prof Werner’s work “represents one of the most exciting and fruitful interactions between mathematics and physics in recent times”.

His maths makes use of probability and tries to cope with the randomness of the world, and he admits this uncertainty helped steer him towards a life in maths.

“I had also many other interests, from football to music, and ending up being a mathematician was probably also the outcome of life’s randomness,” he says. “Or maybe I was probably meant to be a probabilist,” he adds with a smile.

He will pick up this theme of randomness in his talk, hence the title, Random mountains and random distances.

During the talk Prof Werner will describe randomness by using things that are much more familiar, for example mountains. He will use random mountains as a model for mathematical randomness. And he will demonstrate how random constructs can be used to define distances and reveal their hidden properties. We seldom have to understand such things but the mathematical findings achieved by Prof Werner have helped physicists enormously.

As a child the complexity of randomness attracted him and helped set him on his current path.

“Well, every mathematician is different and follows his/her individual path. I guess I for instance always loved the idea that universe is infinite when looking at stars, and the fact that this could be turned into an actual real concept that one can master intellectually,” he says.

“So I guess that in a way this illustrates that I always liked to go into somehow abstract thinking.”

While the maths behind Prof Werner’s work may be complex, he will try and coax people along to an understanding of how it works and how it can be used to solve everyday problems.

Prof Werner will be delivering the 2017 Hamilton Lecture, an annual event organised by the Royal Irish Academy and sponsored by ARUP and The Irish Times. It celebrates the life of William Rowan Hamilton, Ireland’s greatest mathematical scientist.

The lecture is always held this month to mark one of Hamilton’s most important discoveries called Quaternions. He described the flash of inspiration that struck him while walking along the Royal Canal on October 16th, 1843, that delivered this complex new form of algebra.

He later reported having scratched the formula that describes Quaternian mathematics on the stone arch of Broome Bridge. No trace of his alleged graffiti remains for us to see today but Hamilton’s mathematics continues to be used.

Quaternians are particularly useful in controlling objects in four dimensions including time, and are used to help control satellites and also the characters that race across the screens of computer games.

The title of Prof Werner’s Hamilton Lecture is Random mountains and random distances and takes place at 7.30pm on October 16th at the Burke Theatre, Trinity College Dublin.

Tickets are only available online and can be booked at the Royal Irish Academy’s website ria.ie. Tickets cost €5 and concessions for students, retired and unemployed cost €3.

The lecture is one of many events during the Maths Week festival from October 14th to 22nd – Event details, updates and activities are available at www.mathsweek.ie@MathsWeek on Twitter