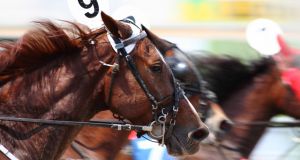 Until now, scientists did not know which elements of the gene held the secrets to understanding the all-important racing distance preference. Photograph: Getty images

In what may be regarded as a new form of “insider knowledge”, Irish scientists have pinpointed the genetic basis that explains why some thoroughbred racehorses are better equipped to race over sprint distances, and others over longer distances.

The researchers from TCD and UCD have discovered the inner workings of a known “speed gene”, which directly affects skeletal muscle growth and, in turn, race distance aptitude – and sheer turn of speed, or not.

Thoroughbred horses are finely-tuned “athletes” with a high aerobic capacity relative to their skeletal muscle mass, which can be attributed to centuries of genetic selection for speed and stamina.

Non-genetic factors such as variation in training schedule can also influence how racehorse distance aptitudes and preferences develop.

Although the so-called speed gene had been identified by earlier work by Prof Emmeline Hill in UCD, until now, scientists did not know which elements of the gene held the secrets to understanding the all-important racing distance preference.

Researchers have now pinpointed the specific section of the “speed gene” that is exclusively responsible for limiting the production of a hormone (a protein called myostatin) which, in turn, affects skeletal muscle development and race distance aptitude.

Lead author TCD associate professor in biochemistry Richard Porter said: “Our data provides the first mechanistic evidence as to the specific element of the ‘speed gene’ that acts as the sole protagonist in dictating its expression in the thoroughbred.”

In short, it means horses that produce less of the hormone, which is determined by their genetic make-up, are sprinters. As a result, this element is the key genetic factor in determining distance aptitude in thoroughbred horses. “This knowledge is extremely valuable to thoroughbred breeders and trainers, in what is a multi-billion dollar industry,” he added.

When Prof Hill made the initial breakthrough, it led to development of a genetic test, but many in the thoroughbred industry were “averse to science”, preferring to concentrate on look and lineage, Prof Porter explained. Newer breeders were, however, embracing the test more.

Critically, knowing the genetic basis for the test meant breeders and buyers could make more informed choices and determine the appropriate training regime for individual horses.

The research team included post-doctorate researcher Mary Rooney and associate professor Vincent Kelly from Trinity, together with Prof Hill from the UCD School of Agriculture and Food Science. Their work was funded by Science Foundation Ireland. The findings have been published in international research journal PLOS One.