Harmony was at the core of Johannes Kepler’s cosmic model

That’s Maths: For Kepler, music played a key role in the emergence of the new astronomy 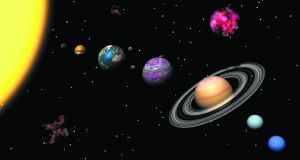 Kepler’s idea was not warmly supported by his contemporaries, but harmonic relations are known today to be crucial. Photograph: Getty

Johannes Kepler, German mathematician and astronomer, sought to explain the solar system in terms of divine harmony. His goal was to find a system of the world that was mathematically correct and harmonically pleasing. His methodology was scientific in that his hypotheses were inspired by and confirmed by observations. However, his theological training and astrological interests influenced his thinking.

Kepler considered the universe as he observed it, not as an evolving system but as a manifestation of God’s creation. He employed contemporary polyphonic music as a model for the harmony of the solar system. The observations of the Danish astronomer Tycho Brahe were precise enough to indicate a relationship with musical harmonies, yet not so accurate as to reveal inconsistencies. Telescopic astronomy was just emerging. Kepler’s time had come.

Kepler’s earliest major work, Mysterium Cosmographicum (1596), accounted for the number, magnitudes and motions of the known planets using regular solids called polyhedra. It had been known since antiquity that there are precisely five such polyhedra – the Platonic solids – and Kepler constructed a wonderful scheme in which the six known planets move on spheres embedded within and surrounding these solids. This gave a reason why there were six and no more planets. It was fortunate for Kepler that the discovery of Uranus was 185 years in the future.

Using Brahe’s observations, Kepler discovered that the orbit of Mars around the sun is oval: the planet moves in an ellipse, with the sun at a focus. This was the result of a protracted struggle in which he wrestled with imprecise observations and complex calculations. The ellipse had been studied by the Greek mathematician Apollonius, but had never been used to such effect in a problem in physics. Kepler also discovered that the line from the sun to Mars sweeps out equal areas in equal times.

Kepler’s two laws were described in his Astronomia Nova, published in 1609. This had a profound effect on astronomy: prediction accuracy increased by two orders of magnitude as a result of his discoveries. However, the best was yet to come: the crowning glory was Kepler’s discovery in 1618 of the third law, connecting the periodic times of the planets to their distances from the sun. This was a key result, but to Kepler it was regarded more as a confirmation of a grander scheme.

For Kepler, music played a key role in the emergence of the new astronomy. He was involved in the practice of music as well as in its application to astronomy, surrounded all his life by musical performance and involved in musical activities. Kepler sought the explanation of planetary motions in terms of harmonic relationships, a scheme that he called the “song of the Earth”. He presented his ideas in his Harmonices Mundi – The Harmony of the World – published in 1619.

Each planet emits a tone that varies in pitch as its distance from the Sun varies from perihelion to aphelion and back, producing a continuous glissando of intermediate tones, a “whistling produced by friction with the heavenly light”. Together, the planets produce the “music of the spheres”. Mercury is the soprano, Venus and Earth the altos, Mars the tenor and Jupiter and Saturn the basses.

The angular speeds of the planets around the sun vary with distance, and the emitted sounds change with speed. Kepler found harmonic relationships between the tones at minimum and maximum speeds. The range for Earth is just a semitone, between Mi and Fa, which Kepler interpreted as Misery and Famine, expressing desolation.

Harmony was at the core of Kepler’s cosmic model. This idea was not warmly supported by his contemporaries and never gained widespread support. Yet, harmonic relations are known today to be crucial, through the mechanism of dynamic resonance, which is of central importance in our current view of the solar system.