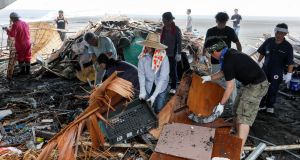 Staff trying to remove debris of a seaside house after it was destroyed by high waves on Yugawara Beach, Kanagawa prefecture, southwest of Tokyo, on July 29th, as Typhoon Jongdari made landfall in central Japan. Photograph: Kimimasa Mayama/EPA

I am just about old enough to remember the Irish heatwave of 1976, the year I turned 13. It was a scorching summer, with a high of 32.5 degrees, which is similar to top temperatures recorded across Ireland this year.

My youngest child is now 13. Neither she nor anyone younger than 33 has ever lived through a month where global temperatures were below the 20th century average. The last time this happened was February 1985. Since then, we have lived through an unbroken streak of more than 400 consecutive months of above-average temperatures.

Last week, the US National Oceanic and Atmospheric Administration published its “State of the Climate” report. It found that the four hottest years ever recorded have all occurred since 2014. “The heatwaves and extreme heat we are experiencing [this summer] are consistent with what we expect as a result of climate change caused by greenhouse gas emissions,” according to Elena Manaenkova, deputy secretary general of the World Meteorological Organisation. “This is not a future scenario. It is happening now.”

As thousands of Irish holidaymakers headed south this bank holiday weekend, temperatures in Spain and Portugal were set to hit or even break the all-time continental high of 48 degrees.

From Japan to Greece to Canada, more than 430 people have died in recent weeks as a result of extreme temperatures. Nearly 120 all-time temperature records have been broken globally. Among the most alarming was in northern Sweden, deep inside the Arctic Circle, where unprecedented wildfires have raged, fanned by temperatures above 32 degrees.

The World Weather Attribution (WWA) network recently published its finding that the 2018 heatwave was made more than twice as likely by climate change. “What was once regarded as unusually warm weather will become commonplace, and in some cases, it already has,” according to the WWA. Its attribution study on the “Lucifer” heatwave that hit the Mediterranean region in 2017 found underlying climate change made its severity at least 10 times more likely.

In Ireland, an EPA-funded project called ClimAtt, based in UCC, is investigating climate attribution of extreme weather events, of which flooding is likely of greatest near-term concern. This work is vital in helping plan for likely future scenarios.

Were attribution studies to start appearing regularly on TV weather bulletins, rather than being tucked away in science papers, they could be far more impactful. “If we scientists don’t say anything, other people will answer that question not based on scientific evidence, but on whatever their agenda is”, Dr Friederike Otto, a climate modeller at Oxford University told the journal Nature. “So if we want science to be part of the discussion, we need to say something fast.”

As accurate, timely climate attribution information becomes available, is there any reason Met Éireann could not include these in their regular weather bulletins? While its contract is with RTÉ, surely the national broadcaster could not object to such relevant bulletins being broadcast? And, since Denis Naughten, the Minister charged with “climate action” is also responsible for RTÉ, this is a zero-cost initiative that could go a long way towards bridging the communications chasm between science and the Irish public on the reality of climate change and what it means in their lives.

In its most recent bulletin, Met Éireann posed the question: “Is Ireland’s dry, warm weather of June, July 2018 due to climate change?” There is, is said in reply, no simple answer, adding that 2018 is “within the natural variability”. Its staff have been notably reluctant to discuss climate change publicly, and are rarely questioned about it in interviews, as the bulk of Irish media coverage treats this year’s heatwaves as a weather story rather than framing it in its climate context.

However, as leading US climatologist Prof Michael Mann put it, asking if climate change “causes” specific events is the wrong question: “The relevant question is: ‘Is climate change impacting these events and making them more extreme?’, and we can say with great confidence that it is.” The impacts of global warming are now “playing out in real time . . . we literally would not have seen these extremes in the absence of climate change”, he told the Guardian this week.

My youngest daughter will be the age I am today in 2060. Assuming the world remains on its current emissions trajectory, and wealthy countries such as Ireland continue to shirk their responsibility to rapidly de-carbonise transport, heating, infrastructure and food-production systems, what kind of future does her generation face?

In all probability, today’s youth will pay a savage price for the casual indifference, cynicism and profligacy of their parents’ generation, as dreams of a prosperous, safe future are swept away in an unending torrent of ecological disasters. Climate scientist, Dr Peter Gleick recently wrote wistfully: “I used to want tomorrow’s flying cars and jet packs. Now, all I want is yesterday’s climate.”