Heat extremes can be expected in coming years, report says 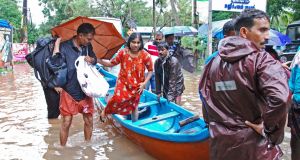 Last year was the fourth warmest on record and the outlook is for more heat extremes approaching levels that would be dangerous for the Earth, according to the latest World Meteorological Organisation (WMO) report.

Weather extremes in 2018 included wildfires in California and Greece, drought in South Africa and floods in Kerala, India. In addition, there were record levels of human-induced carbon emissions.

Average global surface temperatures were 1.0 degree above pre-industrial times in 2018, the WMO said. “The long-term temperature trend is far more important than the ranking of individual years, and that trend is an upward one,” WMO secretary general Petteri Taalas added.

The British Met Office, which contributes data to the WMO, warned temperatures could rise by 1.5 degrees, for instance if a natural El Niño weather event adds a burst of heat.

“Over the next five years there is a one in 10 chance of one of those years breaking the [1.5 degree] threshold,” Prof Adam Scaife of the Met Office told Reuters. “That is not saying the Paris Agreement [which seeks to keep temperature rise well below 2 degrees] is done for . . . but it’s a worrying sign.”

The WMO confirmed the world is now on track for a temperature rise of 3 degrees or more by 2100.

US president Donald Trump, who has pulled the US out of the Paris pact, did not mention climate change in his State of the Union speech on Tuesday.