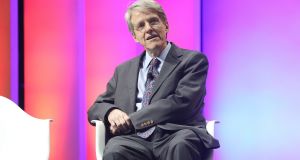 Nobel Prize winner Robert Shiller and author of Narrative Economics: ‘A lot of what happens economically actually depends on the stories we tell each other and a lot of what people do is not really optimal for them.’ Photograph: Taylor Hill/Getty Images

Economics is driven by the stories we tell each other, and those which become very popular have the power to drive economic events like stock market crashes, recessions and recoveries.

This is the main thesis of a recent book, Narrative Economics, by Nobel Prize winner Robert Shiller.

Economics is driven by narratives in a way which closely resembles the spread of epidemics, according to Shiller, Sterling professor of economics at Yale University.

In Narrative Economics, Shiller shows how stories have always driven economic events. Spread through the public by media and word of mouth, ideas go viral like contagions with the potential to move stock markets and cause economic change, potentially leading to mass unemployment and even war.

Using a range of historical examples, from the stories surrounding the 1929 Wall Street crash and the great depression, from housing booms and busts, to the recent rise of bitcoin euphoria, the author lays out the foundation for future work in systematically qualifying and assessing the notion of the narrative as a science.

The following is an interview by way of question and answer:

How far back does the idea of narratives driving economics go?

“The history of thought in economics goes all the way back to Adam Smith who wrote The Wealth of Nations in 1776, for which he is considered the father of modern economics.

But he also wrote a book called The Theory of Moral Sentiments, about how people really think. There’s quite a bit about narrative economics in that book. So the idea does in fact go way back.

Traditional ideas in economics are around the notion that people are rational, and that’s important because a lot of our decision-making is indeed rational. But crucially, not all of it.

A lot of what happens economically actually depends on the stories we tell each other and a lot of what people do is not really optimal for them. People are often trying to live out a story and they imagine that the world is paying attention to them more than it actually is.

What is the analogy with epidemics you write about in the new book?

Understanding how stories can mutate and change and impact on their environment, say the economy, is like trying to understand a virus. Viruses spread. Influenza, for example, is a virus which has many different types of populations and different ones are appearing all the time.

But there is some core influenza idea, you might say. So you have to understand how this idea is transformed and changed and how it can be stable enough through time to create an epidemic.

New varieties of influenza are evolving all the time but most of these wither away. It’s the same with narratives – they mutate and change, they come and go – but only some can reach a certain stability and become prevalent.

So are we completely lacking narratives in current economic models?

There are mentions of narratives in current economic theory but economists tend not to talk about it as a real narrative science. In fact economists often use the term narrative in a negative sense. They might say that ‘the narrative is this and that, but in reality it is like this!’ So they often miss the point that the narrative is actually real and can in fact drive change.

I think that traditionally the field of economics has looked at narratives in a kind of casual sense. Part of the reason for that is economists haven’t really liked dealing with the notion of a narrative because they cant be precise about it.

Previously economists didn’t have the tools to search for the narratives, but now we do, and this idea of systematically observing narratives, which I am proposing, is definitely a new one. Until now it has not been a theme which economists knew what to do with.

What is wrong with current economic models and what can we do to improve them?

I think that our current methods for collecting data around economics are rather weak. Take a public opinion poll, for example. Researchers try to be as realistic as possible, to get a good, representative, sample. For example, you don’t want to only include the people who are interested in taking the poll, since they would probably be unusual in some sense. Also these polls are difficult to construct.

Generally they ask the same questions through time, year after year. But the problem that this faces is that such polls can’t accommodate new narratives. The question that you, as an economic researcher, wrote 20 or 30 years ago doesn’t sound the same anymore. There’s a different narrative around today.

In economics there hasn’t been a systematic representative sample through time to get at peoples’ thoughts about the economy. That’s what narrative economics is about. I’m thinking about how we can better collect data and try to be more systematic in a scientific way. If you’re trying to understand history you can look at digitised newspapers and magazines, and sometimes collections of letters. Google Ngram has recently proved extremely useful.

I hope that eventually we’ll combine traditional Keynesian economic modelling with the new ideas around narratives. I don’t know the relative input though. Just how much of the new models will be Keynesian and how much will be this new thing, we just don’t know. It’s very hard to think about models which haven’t been developed yet.

How effective do you think these forecasts can be?

Just look at mathematical epidemiology which is around 100 years old. I’m pretty sure we manage epidemics much better now than we did 100 years ago, and that’s helped by the existence of an underlying theory.

Similarly, I think that research on narrative economics will evolve over decades. We will develop a clearer understanding of meaning in textual data and our tendency to rely on aggregates like GDP, interest rates, or unemployment rates will be replaced with something more sensible.

We’ll not only be able to make better predictions – which at its most beneficial could help prevent war – but we may have a better sense of human welfare. In fact that’s what we’re doing here; we’re trying to get towards improving human welfare. GDP isn’t much use at assessing this. To give a stark example, GDP can go up in wartime while our welfare goes down.

Using narrative economics we might also be able to understand why certain phenomena, such as unemployment, for example, are considered so bad. Maybe it’s all about the narratives that are being told. Unemployment rates were very high in the great depression but at the same time the social reaction to unemployment changed.

It wasn’t such a disgrace. Given the dire economic situation people understood that it might not be your fault if you were unemployed. So maybe it was good in some sense. People who were trying to create an impossible story or narrative for their lives could calm down and be more realistic about themselves.

What are you working on now?

I’m currently writing a paper entitled ‘Narratives driving the longest economic expansion 2009-2020’. The US economy has expanded for 10 years without interruption, until now, and demands an explanation which I think can be helped by a discussion around the narratives involved.

There are so many narratives around today that it is hard to be systematic about understanding them all together. One of the narratives which is currently persistent is around the US president. We have an incredible polarity now in the US between the pro- and anti-Trump groups and the narratives they tell tend to be opposite to each other.

There are also narratives today around global employment – people are leaving their countries, causing harmful brain drain. There are other narratives, too, around automation and the apparent threat to jobs. Putting all this together, and finding meaning, is the task at hand.”

Dr Conor Purcell – @ConorPPurcell – writes about science and culture; some of his other articles at cppurcell.tumblr.com