How ancient DNA is transforming history 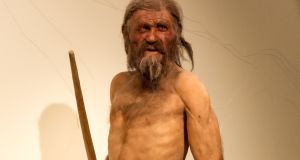 A reconstruction of Ötzi the iceman, the 50,000-year-old European found in the Italian alps in 1991. Photograph: Thilo Parg

Over the past 10 years, a new field has emerged which is revolutionising our understanding of human history and anthropology. Ancient DNA, the analysis of DNA from human remains, is beginning to unravel some of the mysteries of the past, like the migration of people and the spread of culture, through periods of time from hundreds to tens of thousands of years.

Until recently, our reconstruction of the past relied on archaeology and tentative hypotheses, but now the hard science of genetics is beginning to take a leading role in understanding the population patterns we see across the globe today. At Trinity College Dublin, Prof Dan Bradley is a world leader in this emerging field – he has been trying to understand the human past from DNA for the past 25 years.

“For years, we had been looking at modern genetic data and trying to understand how population patterns may have come about,” he says. “But compared to ancient human DNA, the problem with modern data is that it can only bring us so far.”

Bradley explains it was the case of Ötzi the ice man, one of the first ancient Europeans to have their genome sequenced, which made him realise the power of ancient DNA.

“Ötzi’s genome did not resemble people from the Alps today, where he was found, rather it resembled people from Sardinia, ” he says. “It was then that the penny dropped: the genetic structure we see across populations we have today wasn’t always there. That was a big moment.”

According to Bradley, a good way to think about human genetics and population patterns is that it’s like looking at the surface of an archaeological site. “What can you tell about the surface?” he asks. “Not so much. It’s not until you start digging down and looking at the layers that you realise what has happened over time. So the real way to understand human genetics and migration is to time travel, and that is what ancient DNA has enabled us to do.”

Because of the ancient DNA revolution, we now know that major population changes and migrations happened over time. According to Dr Carleton Jones, a lecturer at the School of Geography and Archaeology at NUI Galway, the displacements of people due to new migrations also had an impact on culture.

One outcome from the new science is that we now know the people who built the passage tombs at Newgrange, Knowth and Dowth were not the same people we are today. They were replaced by another group who arrived later.

“What you find is that there have been huge genome turnovers in Europe, ” says Bradley, “and this extends all the way to our shores. The character of the genome changes over time.”

“I think genetics has helped to answer whether cultural change is the spread of ideas or the people themselves, through migration. For example, it looks like the advent of farming in western Europe was accompanied by a very large movement of people.”

Given the pace of advances in ancient DNA sequencing, collaboration between archaeologists and geneticists is picking up speed, and is likely to enter a new stage where a lot of the previously assumed truths about culture and anthropology may be overturned.

According to Dr Jones, this transition will require caution on both parts. For example, he says anthropological and archaeological studies show us that people and groups construct identities not only based on their actual ancestry; they also base identities on imagined ancestries, shared material culture, shared practices, and many other aspects in addition to – and sometimes in contradiction to – actual genetic ancestry.

“There are challenges for practitioners in both fields in terms of fully understanding the nature of each other’s data, terminology, and interpretive frameworks,” he says. “These challenges are now starting to be debated in the literature.”

Conor Purcell is a science journalist with a PhD in earth science. He also editor of www.wideorbits.com – some of his other articles at cppurcell.tumblr.com

In Prof David Reich’s book Who We Are and How We Got Here, published earlier this year, the author argues that ancient DNA has become the most important archaeological tool since radiocarbon dating – the method for determining the age of an object containing organic material.

Ancient DNA is helping to build the narrative of ancient people’s lives, not only by looking at human DNA, but also that of their partner-species. According to Prof Bradley, “by understanding the genetics of both humans and the animals they kept, along with the archaeological evidence, we can start building a narrative around these people”.

In July 2018, Bradley and his colleagues published a paper in the journal Science, where they established that, through the domestication of goats 8,000 years ago, human societies forced evolutionary selection for goat traits, including pigmentation and stature.

“Cattle, sheep, goats and dogs are our partner species,” he says, “and they tell us a lot about the past, especially the process of domestication alongside the beginning of agriculture.”

“In the future, I think ancient animal DNA will tell us a lot more about human society, including phenomena like trade and the ancient economy.”

Coursing may not resume during Level 5 Covid-19 restrictions, judge rules 16:49
Man to be tried over threats to family of murdered Cameron Blair 16:44
Five years for man ‘abandoned’ by accomplices during armed robbery 16:12
Doctor who helped woman urges society to call out coercive control 16:05
Fifteen junior doctors receive over €100,000 in overtime pay amid Covid-19 pressures 16:01