That’s Maths: Famous for his ballads, Lehrer was also one of the great satirists of his time 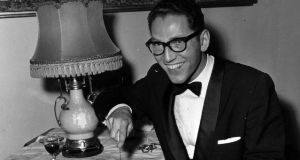 Tom Lehrer, mathematician, singer, songwriter and satirist, was born in New York 90 years ago. He was active in public performance for about 25 years from 1945 to 1970. He is most renowned for his hilarious satirical songs, many of which he recorded and are still available today on YouTube.

Lehrer started learning classical piano at the age of seven, but developed a taste for more contemporary music, studying under a popular-music piano teacher and writing show tunes. The music of Cole Porter made a deep and lasting impression on him. At school, Lehrer was regarded as a child prodigy and he entered university when just 15. While studying mathematics at Harvard University, he began to write comic songs to entertain and amuse his friends.

Lehrer earned a BA in mathematics from Harvard at the age of 18 and an MA the following year, and was inducted into Phi Beta Kappa, the oldest and most prestigious academic honour society in America. Lehrer pursued a doctoral programme at Harvard for several years, also working for a time as a researcher at the Los Alamos Scientific Laboratory. He served in the US Army from 1955 to 1957 and was involved with the National Security Agency. In 1960, he returned to full-time studies at Harvard, but abandoned his mathematical research in 1965, having worked on it intermittently for 15 years.

From the early 1970s, Lehrer devoted most of his time to teaching mathematics and music theatre. He taught classes at MIT and at Harvard and, in 1972, he joined the faculty of the University of California, Santa Cruz, where he taught an introductory course entitled “The Nature of Mathematics” to liberal arts majors. He described the course as “Math for Tenors”. He also taught a class in musical theater there. He retired from academia in 2001, continuing to live in Santa Cruz .

The database of the American Mathematical Society names Lehrer as a co-author of two mathematical papers, “Random walks with restraining barrier as applied to the biased binary counter” and “The distribution of the number of locally maximal elements in a random sample” – both in leading mathematical journals.

The heavy mathematics encountered by Lehrer is illustrated by the title of a mathematical paper in his song “Lobachevesky”, about the Russian mathematician and geometer famous for his work on hyperbolic geometry. The spoof paper was entitled “Analytic and algebraic topology of locally Euclidean metrization of an infinitely differentiable Riemannian manifold”, a parody of the abstruse titles found in mathematical journals.

Lehrer wrote several songs that dealt with current social and political issues. One includes the lyrics “Once the rockets are up, who cares where they come down? That’s not my department! says Wernher von Braun”. In “New Math”, Lehrer mercilessly pilloried the controversial educational programme that was introduced in the 1960s. On the ill-conceived revolution in the teaching of school maths he wrote “It’s so simple, so very simple, that only a child can do it”. His song for children, “That’s Mathematics”, cleverly illustrates the many ways in which mathematics is used.

Lehrer surely had the talent to become a fine research mathematician but he chose another road, becoming one of America’s great songwriters, perhaps the best musical satirist of the 20th century. His mathematical research is forgotten but the humour of his many witty, pithy songs never fades.