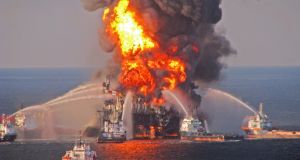 Deepwater Horizon’s devasting spill in the Gulf of Mexico in 2010 is still fresh in the memory of some 60 environmental groups who are also united in opposition.

If the planet sounds a lot noisier since Donald Trump became US president, there’s a fair cacophony building up beneath the waves. Earlier this year, the Trump administration proposed opening up most of the US coastline to drilling for offshore oil and gas, reversing protections put in place by the Obama administration.

Mr Trump’s party colleague, Republican governor of Florida Rick Scott, was among the many voices to denounce the move, which opens up more than 90 per cent of the outer continental shelf’s total acreage for leasing. Deepwater Horizon’s devasting spill in the Gulf of Mexico in 2010 is still fresh in the memory of 60 environmental groups who are also united in opposition.

However, it is not just the drilling that has a potentially negative impact on the marine environment – and on wider climate change mitigation targets – but the techniques used to survey areas beforehand, as in seismic testing.

Seismic testing involves generating intense low-frequency impulse signals which are directed into the sea bed to locate reservoirs of hydrocarbon which may be lie several kilometres under the seabed. The impulse signal is produced by releasing high pressure air into the water via arrays of air guns. These are towed behind a survey vessel which are simultaneously fired at intervals.

Networks of hydrophones behind the airguns pick up the reflections from the geological layers below the seabed, and this generates an acoustic image. The acoustic impact is considerable, as an airgun array can emit up to 250 decibels at source, and 117 decibels from 20 nautical miles out. A typical seismic survey will last two to three weeks, covering a distance of 300-600 nautical miles.

The total amount of energy emitted depends on frequency, intensity and firing interval. However, seismic is regarded as the most energetic source of man-made underwater noise – at 3.9 x 10 to the power of 13 joules – after nuclear explosions and “ship shock” trials by navies to test the structural integrity of their craft.

The impact is akin to a pile driver constantly interrupting a symphony, given that the acoustic atmosphere below the waves has been compared to an orchestra of sound. It has long been known that seismic activity can disrupt behaviour of whales, dolphins and other marine mammals who depend on sound to find prey, select migration routes, and communicate. Military sonars, measured at 2.6 x 10 to the power of 13 joules, are frequently blamed for strandings of marine mammals.

However, an Australian study published last year found that seismic activity also has far greater impact on zooplankton than previously thought. The research published in the science journal Nature Ecology and Evolution found that air gun signals which are commonly used in marine petroleum exploration can cause a two- to three-fold increase in mortality of adult and larval zooplankton, on which healthy and productive marine ecosystems depend.

The research by the University of Tasmania and Curtin University involved deploying seismic air guns in the ocean off Southern Tasmania. A special staining technique was used to count the number of live and dead zooplankton collected in nets, comparing hauls before and after air gun operations. Prof Robert McCauley, lead author, said the results raise questions about the “significant disruption” caused to plankton population levels.

“Plankton underpin whole ocean productivity,” Prof McCauley said. “ Their presence impacts right across the health of the ecosystem so it’s important we pay attention to their future.” The paper stressed the “urgent need” to conduct further research.

A week later, a paper published by the Australian Commonwealth Scientific and Industrial Research Organisation (CSIRO), simulated McCauley’s work and found a 22 per cent mortality rate for zooplankton within the survey region, and “substantial impact” within 15 km of it.

It said impacts were “barely discernible” within 150 km, and noted that zooplankton populations “recovery quickly” after seismic exposure due to their fast growth rates. It did acknowledge that more work was required.

This second study was funded by the Australian Petroleum Production and Exploration Association, which “speaks volumes in itself”, according to Irish Fish Producers’ Organisation (IFPO) chief executive Francis O’Donnell. He is among Irish fishing industry representatives calling for a review of licensing terms for seismic testing in Irish waters, given the impact on herring, prawn and other whitefish stocks.

Seismic surveying has taken place over Ireland’s Continental Shelf since 1965, and is subject to approval from the State’s petroleum affairs division, currently within the Department of Communications, Climate Action and Environment. As an indication of activity, there were two seismic surveys in 2015, four in 2016, and four last year, located in the Celtic Sea and Porcupine Basin. There has been one licensed this year to date.

The department says any consent applications for seismic surveys are assessed in accordance with the Environmental Impact Assessment Directive, the Habitats Directive and the Birds Directive – although EIA directive compliance only came about as a result of a case taken to Europe by the Irish Whale and Dolphin Group ( IWDG).

The department says that the McCauley study was conducted over two days, using a single airgun at a depth of 34-36 metres, and it cites the CSIRO modelling study as noting that McCauley’s work was “limited in space and time, making the study suggestive rather than definitive”, and suggesting a definitive study would require more comprehensive zooplankton sampling.

The department also cites an article on the Marine Pollution Bulletin in 2017 which found “no evidence of reduced catch or abundance following seismic activities for invertebrates” and “conflicting evidence for fish with catch observed to increase, decrease or remain the same”.

However, that same article noted that “studies on physical trauma, behavioural changes, or physiological indicators of stress provide a more mechanistic and valuable understanding of potential impacts”, and acknowledged a “vast gap in our knowledge about sound thresholds and recovery from impact in most fish and almost all invertebrates”.

The Marine Institute agreed to review some of the key literature in response to concerns raised by the Irish Fisheries Science Research Partnership late last year, but noted that some of the research is contradictory. It cited a 2013 report which found that 37 marine species have been shown to be affected by seismic airgun noise, from behavioural changes such as decreased foraging, habitat displacement, stress, decreased egg viability, and growth.

Marine Institute director of fisheries ecosystems Dr Paul Connolly says the International Council for the Exploration of the Sea (ICES) is best placed to undertake a further evaluation, but this would have to be based on a request from the European Commission or from member states. The Northern Western Waters Advisory Council hosted discussion on underwater noise and seismic surveys in Dublin on September 12th with Dr Antony Hawkins of the Aquatic Noise Trust and Bob Gisiner of the International Association of Geophysical Contractors. That places it further up the agenda, he notes.

Deep-diving whales are washing up on Irish shores – why?

WHEN an unprecedented number of deep-diving whales were washed up Irish and Scottish coastlines last month, two were within several kilometres of each other in Donegal. IFPO chief executive Francis O’Donnell photographed one of the Cuivier’s beaked whale carcasses on Loughrosmore estuary and was told of a second close by in Rosbeg.

“There’s something going on out there, and we need to know why,” O’Donnell says.

Irish Whale and Dolphin Group (IWDG) co-ordinator Dr Simon Berrow concurs, and has written to the Department of Foreign Affairs seeking an investigation – on the basis that he believes it is more likely to be the result of military activity. The North Atlantic Treaty Organisation (Nato) undertook training in submarine and antisubmarine warfare in the north Atlantic in late June and early July.

Dr Berrow thinks the mortalities in this case are less likely to be due to seismic activity, but doesn’t rule anything out. “Seismic work is a big grey area, and must have an impact on fish, but there is a wider debate about energy security and whether we should still be exploiting hydrocarbons at all.”