We ‘cannot ignore’ the immune system in any disease, says Trinity scientist 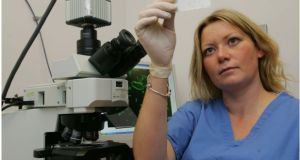 The immune system is constantly doing repairs and maintenance in the body and does not sit around waiting for a call to action, Dr Lydia Lynch of Trinity College Dublin and Harvard Medical School told the Schrödinger at 75 conference in Dublin.

Research over the past five years had shown that we cannot ignore the immune system in any disease, Dr Lynch said.

The immune system was now recognised as being involved in cancer, depression, Alzheimer’s disease, obesity and even keeping babies warm.

A major advance in cancer therapy came about when it was discovered that cancer cells use certain proteins (known as checkpoints) to stop our immune cells targeting them. Checkpoint inhibitor drugs switch the immune system back on and allow a patient’s own “T cells” to begin destroying a tumour.

Dr Lynch welcomed the approval by the HSE of a major new immunotherapy drug (nivolumab) for treatment of cancer in Ireland.

She also spoke about how fat has an immune system itself, confirmed by her recent discovery of immune cells in fat tissue. This year she found a type of T cell that lies between fat cells, but is rare in the rest of the body.

The cells appear in fat a few days before birth. Her studies showed T cells were essential to helping generate body heat.“Who would have thought that these T cells are in our fat to keep us warm when we are born?” she said.

The immune system, she concluded, had a much broader role than protecting people from nasty bacteria and viruses. “It shapes our personalities, responds to our diet, it protects us from and can cause obesity, it attacks cancer cells and can cause autoimmunity disease, especially when we get old. And it also seems to protect from, and sometimes contribute to, brain disorders.”