For a career in science, you need passion and enjoy what you do 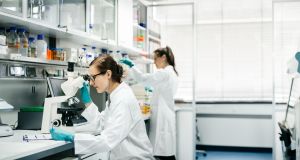 Science can make for a fascinating career in research, but for others a degree in science opens lots of doors in pursuing other careers

I’m often asked by science students for career advice. But really, is this a good idea? After all, here’s a woman who went to university when she was 18 and never left! First I did an undergraduate degree, then a PhD followed by a couple of postdocs (professional researcher jobs you do after a PhD), before landing a temporary academic position and then a permanent one. I’ve spent my whole life in the university sector – what real world advice am I qualified to give?

That said, having seen so many students come and go through the front gates of Trinity and having done a significant amount of engagement work out in the badlands beyond academia, I do have some insight into the variety of career destinations that a qualification in science might lead to, and the soft skills that studying it can equip you with.

Many people might not realise it from watching TV shows with stereotypical science nerds in lab coats and thick-rimmed glasses, but scientific training doesn’t just prepare you to be a scientist; it gives you a whole bunch of capabilities that can be put to use in many other walks of life.

By studying science, you are by default studying writing, analysis, public speaking, critical thinking, teamwork, leadership, ethics, creativity and so much more. These skills are enormously valuable in the wider marketplace, as evidenced by the fact that the vast majority of science graduates move away from universities to public and private organisations. They could be doing science-based roles or something very different: today’s world is data-driven and the ability to understand numbers, statistics and the scientific method can be a serious selling point in everything from app development to logistics to HR to business management to communications. A science degree can set you up for many things.

However, if you’re committed to science and it’s your dream to be a professional researcher in a university, be prepared. Professional research jobs typically have short-term contracts, making them rife with instability. Finding the next position is notoriously difficult, and even when you do, it might involve moving a long way from home (one of my current postdocs has worked on four continents in as many years). What’s more, you’re ranked by the number and quality of academic papers you’ve published, as well as your ability to attract funding for your own research, which are often linked to broader trends than pure quality or interest. It’s a tough sector.

I have been lucky and have taken the opportunities that have arisen, but my career path is not typical. Nor was it planned: I never once thought I would one day be a university professor. I never sat down and thought, you know what, I’d like to do a PhD, postdoc for a few years and then get an academic position. Not once. And there are many people who did think those things, for whom it didn’t happen.

But let’s be honest, this isn’t unique to science. There are few guaranteed paths to success in any career. The only thing you can guarantee yourself is that you’ll follow your passions in life, and try not worry too much about where they’re taking you. I know we’re all supposed to have plans and goals and career strategies, but it stands to reason that if you genuinely enjoy what you are doing, then you are more likely to work hard at it and want to do your best.

So if you get a buzz from precise analytical work in the lab; do that. If you are thrilled by seeking out new species in the tropical jungle; do that. Don’t be swayed by what your more vocal friends and family think. I remember my cousin asking me why on earth I was studying the behaviour of bees when I was doing my PhD – what was the point? I struggled to answer at the time. Erm . . . it was fun? It was interesting? Someone paid me (admittedly very little) to do it? Now I think I could come up with a much more eloquent answer, but at the time, the simple fact was that I did it because I enjoyed it. And I still think that’s the best reason to do anything.

Jane Stout is a professor in botany in the School of Natural Sciences, Trinity College Dublin