Nasa astronaut home after breaking records with 665 days in orbit

Peggy Whitson, an astronaut who has broken US records with a career-total of 665 days in orbit, returns to Earth after her third mission on the International Space Station. Video: NASA 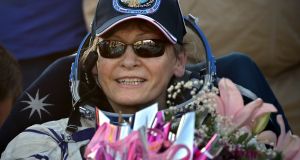 Nasa astronaut Peggy Whitson after landing in a remote area outside the town of Zhezkazgan, Kazakhstan. Photograph: Sergei Ilnitsky/EPA

Nasa astronaut Peggy Whitson made a parachute landing in Kazakhstan on Saturday, breaking US records with a career-total of 665 days in orbit.

Whitson (57) ended an extended stay of more than nine months aboard the International Space Station, a $100 billion research laboratory that flies about 400 km above Earth.

“I feel great,” the biochemist said during an inflight interview on Monday.

“I love working up here. It’s one of the most gratifying jobs I’ve ever had.”

During her third mission aboard the station, Whitson spent much of her time on experiments, including studies of cancerous lung tissue and bone cells.

She also completed four spacewalks, adding to her six previous outings, to set a record for the most time spent spacewalking by a woman.

Two crewmates who launched with Whitson in November returned to Earth three months ago.

She stayed aboard to fill a vacancy after Russia scaled down its station staff from three to two cosmonauts.

Whitson returned to Earth with Jack Fischer, also with the National Aeronautics and Space Administration, and Russian cosmonaut Fyodor Yurchikhin, who had been aboard the station since June.

The crew’s Russian Soyuz capsule touched down in Kazakhstan at 9:21 pm on Saturday.

“I’m looking forward to seeing friends and family,” Whitson said during another interview.

“But the thing I’ve been thinking about the most, kind of been fantasizing about a little bit, are foods that I want to make, vegetables that I want to sauté, things that I’ve missed up here.”

In April, Whitson broke the 534-day US record for cumulative time in space. Only seven Russian men have logged more time, including Gennady Padalka, the world record-holder with 878 days in orbit.

Whitson, who grew up on a farm in Iowa, said she was inspired by the US Apollo program that landed men on the moon, but it was not until later, when the first women become astronauts, that she set her sights on joining them.

Whitson, who became an astronaut in 1996, was the first woman to command the space station and also the first woman and first non-pilot to serve as chief of the Nasa Astronaut Corps.

“I am working on paying forward some of the advice and mentoring that I received on my journey, in hopes that one day those young people will do the same and look back on a life in which they leapt at the opportunities and broke their own records,” she said.