NASA's Cassini spacecraft ended its groundbreaking mission to Saturn with a meteor-like plunge into the ringed planet's atmosphere. Video: Reuters 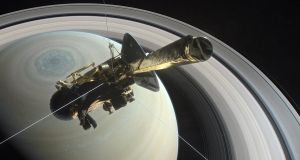 Nasa’s Cassini above Saturn’s northern hemisphere prior to making one of its last dives. Photograph: Nasa/PA 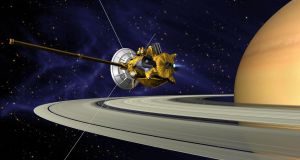 Nasa issues an artist’s conception of Cassini orbiting of Saturn as the spacecraft heads towards its final plunge into the planets atmosphere. Photograph: EPA/Nasa/JPL Caltech

The end of Cassini is here. One of the most ambitious and successful space missions ever undertaken by Nasa, the spacecraft will also be long remembered for the beautiful images it generated as it embarked on a two-billion mile journey with “fly-bys” of Venus, Jupiter and even the Earth.

Its final destination was Saturn and its moons. That is where it did its most important work. So it’s an appropriate setting for its glorious end – early on Friday morning – when it took a death plunge into the ringed planet’s thick atmosphere, and continued taking images until it was no more.

The $2.9 billion mission also helped scientists learn more about the solar system and how it was formed. But they were especially interested in Saturn’s giant moon Titan, which has a nitrogen and methane atmosphere and in some ways resembles an early version of Earth.

The grand finale began at about noon on Friday [6:30 am Eastern US time], “but given the time it takes for the signal to reach Earth, we will receive those last bits of data just before 8 am [on the US east coast] long after Cassini is gone,” explained Cassini project scientist Linda Spilker.

Contact was quickly be lost once the spacecraft enters Saturn’s atmosphere at a high speed. About two minutes later, Cassini burned and disintegrated completely – any traces of it will melt due to the heat and high pressure of the giant planet’s hostile atmosphere, she added.

The 22ft long spacecraft, launched from Cape Canaveral, Florida, in 1997, took seven years to reach Saturn. Each fly-by of Venus and Jupiter provided a gravitational “kick” that boosted Cassini’s speed to more than 42,500 mph and helped the probe on its way.

Another challenge was communicating with and controlling an unmanned robot so far out in the outer solar system. Saturn is on average 890 million miles from Earth, and it takes around 83 minutes for radio waves to cross that distance at the speed of light. Ground controllers could not give Cassini “real time” instructions and instead relied on extensive pre-programming.

Complex sequences of commands were written for large blocks of time lasting hours, days or even weeks which were encoded in radio signals beamed to the craft. In addition, the probe’s computer “brain” automatically kept it safe and stable and responded to problems requiring immediate action.

Its power had to come from a small plutonium-fuelled nuclear reactor rather than the familiar solar panels seen on many space probes.

The Nasa team packed Cassini with instruments, leading to comparisons with a multi-purpose Swiss army knife. It also carried a small lander called Huygens, supplied by the European Space Agency, whose descent to the surface of Saturn’s giant moon Titan made headlines around the world and marked the highpoint of the mission.