The good news is there is still a considerable resource left to protect, according to new research by Irish marine biologist Dr Peter Tyndall 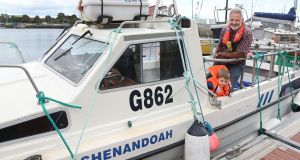 “Good news” and “marine research” may seem mutually contradictory, and rarely share the same hashtag on the Twitter machine.

Ocean warming and acidification, melting ice opening up the North-West passage, and the rush to mine deep-sea minerals to feed the smart electronic industry make for a bleak global picture.

Come the close of year in Europe, the spotlight also shines on the state of fish stocks in these waters. Autumn is the time for collating and analysing survey data before the annual pre-Christmas haggle by EU fisheries ministers over catches and quotas.

In Ireland’s case, the outcome is never brilliant – in that there is a tacit acceptance that the state with one of the largest sea areas must fish with one hand tied behind its back to facilitate its European neighbours. Displacement of more European vessels into these waters as a consequence of Brexit is expected to increase pressure on some of the most biologically-rich waters in the EU.

Mirabile dictu, there is still a considerable resource left to protect, according to new research which marine biologist Dr Peter Tyndall is keen to highlight.

Dr Tyndall is due to retire shortly from Bord Iascaigh Mhara (BIM), but has agreed to head up a new organisation – known as the National Fishermen’s Development Group – which aims to communicate the complexities of a sector sometimes associated with negative headlines.

The good news on stocks relates to a system known as maximum sustainable yield (MSY). Now the cornerstone of the European Common Fisheries Policy (CFP), MSY calculates the level of exploitation a stock can sustain without “undue stress” while continuing to grow, spawn and replicate.

Average stock biomass in the north-east Atlantic has also increased by between 35 and 38 per cent between 2003 and 2015, according to figures from the International Council for the Exploration of the Sea (ICES) and European Commission.

One stock in very rude health is hake, the magical “merluza” targeted in these waters by Spanish fleets. Not only are stocks continuing to grow, but they are expanding further into the North Sea. This could allow for a 10 per cent increase in total allowable catch next year, Dr Tyndall says. “Boats frequently worked three or four strings of gill nets to make a day’s pay on hake, but now they shoot just one string of gear for fear of catching too much fish.”

He attributes this to a hake recovery plan which has allowed stocks to improve, but says that Irish boats would still like to see mesh size increased from 100mm to 120mm to ensure this trend continues. The EU had reduced mesh to 100mm several years ago to appease Spanish interests after a number of EU boats were arrested for undersize gear.

Stocks of nephrops or Dublin Bay prawns, constituting Ireland’s second most important fishery, have also increased – notably on the Porcupine Bank off the west coast by up to 68 per cent, he says. However, this is offset by a decrease in burrows in other areas off the west and south coasts.

Dr Tyndall says the state of Irish Sea cod is of particular interest. For nearly two decades, scientific opinion on the state of the cod stock ran contrary to the experience of skippers. The narrative was that the stock was being overfished. Yet temperatures, currents and availability of the correct type of plankton for larval fish to feed on were also “factors that were not so easily quantified”, he says.

ICES re-evaluated its assessment model, and scientific advice is now recommending a 375 per cent total allowable catch increase for cod in the Irish Sea. This year, the Irish quota is 787 tonnes, of which about 50 per cent has been caught to date.

Former ICES president and Marine Institute scientist Dr Paul Connolly sounds a note of caution here, while concurring with Dr Tyndall’s figures. Back in 1990, the total allowable catch for cod in Europe was 15,000 tonnes, of which about 10,000 were caught. After the stock collapsed in 1999, catches had to be significantly reduced, and recovery is from a low base, he says.

Of some 72 stocks in EU waters, 38 per cent are being fished sustainably, 20 per cent are not sustainably exploited yet and 42 per cent require better data, Dr Connolly says. He agrees that hake have experienced a “tremendous recovery”, due to both restrictions which fishermen signed up to and the influence of “Mother Nature”.

Dr Connolly is involved in an Irish Fisheries Science Partnership which aims to improve communication between skippers and scientists, and says this is already yielding results. He would like to see more skippers taking a chance with the work on selective gear which Dr Tyndall and his BIM colleagues have pioneered. (see panel)

The shadow of climate breakdown is a serious long-term reality, and Dr Tyndall has seen much evidence of warm water species off this coast. Giant squid, such as those caught recently off Kerry, are becoming a regular by-catch.

“It probably requires an accessible data system which allows skippers to make general observations for the benefit of all,” he says.

Peter Tyndall may have spent more time on a deck than most scientists, having fished off north America, worked on oil rigs, and managed a co-op for the Lough Foyle fleet in Greencastle, Co Donegal. His work with BIM is on gear technology designs systems that are more selective to reduce unwanted by-catch.

“This type of conservation work never makes for headlines, because it is complex, but it sometimes produced very good results,” Dr Tyndall explains.

One example is the “Seltra” system developed in Denmark and adopted here by prawn fishermen, which encourages fish to swim into the top of the net, and then out again, while prawns tumble down into the cod-end.

BIM worked with companies like Pepe Trawls Ltd in Howth, Co Dublin, on technology, which applies a mixture of geometry and physics to reduce by-catch and increase quality, he says.

A trawl made of T90 mesh, designed with Swan Net Gundry of Killybegs, Co Donegal, improved selectivity of whiting and haddock in trials. Named after its 90 degree “turn”, the mesh is square rather than diamond-shaped.

“We took boxes from the control net and from the T90 trawl and gave them to five different merchants who were unaware of the different catching methods. The T90-caught fish clearly won on quality,” he says.

He has also worked closely on conservation with the Galway Bay Inshore Fishermen’s Association. Chairman Vincent Connell and his members voluntarily shortened their shrimp pot season three years ago. Ten boats working from Spiddal into Galway now land larger shrimp, sold live to France, Spain and Italy, and the fishery is worth up to €1 million annually. Dr Tyndall says it shows how trusting fishermen to manage, rather than be managed, can produce the best results.