The traditions of the festive season that are worth preserving

Some of the same species are becoming prevalent worldwide, causing concern among scientists of what’s known as ‘global ecological homogenisation’ 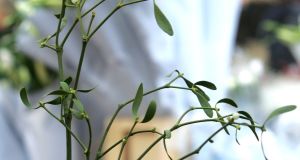 Mistletoe – an invasive species in every sense – comes into its own at Christmas time. Photograph: Cyril Byrne

A family Christmas is always a hodgepodge of influences. In our family, the kids open their stockings when they wake up, but they have to wait until everyone is up, dressed and breakfasted before starting on the presents under the tree. Apparently that’s “not what Everyone Else does” and is a “stupid” tradition (according to my 11 year old), but despite the grumblings, it has persisted.

The customs we build up over generations are what make Christmas special. And when families merge, new traditions are created: when I was growing up, we had the baked ham at breakfast time while my husband’s family had it on Christmas Eve. Now we have it at both times, but still, never with the turkey!

Our national traditions are also something of a hodgepodge. Some of our best-loved ones are the result of a similar sort of mixing of the best bits from a wide variety of places: sparkly, decorated Christmas trees from Germany, red-leaved poinsettias from Mexico, turkeys from the Americas, cloves and nutmeg from the tropics . . . the list goes on. Even mistletoe – a parasitic plant that grows on the branches of trees from which it sucks water and nutrients – was imported from Britain, and the most popular kind of Christmas tree – the Noble fir – comes from western North America.

But it’s the native species in our festivities that give us a real window into the origins of our Christmas culture, pointing back to traditions that have been a part of life on this island for millennia. The holly that forms the understorey in some of our oldest woodlands and the ivy that anchors itself to trees, rocks and buildings, were used to decorate homes in mid-winter to ward off evil spirits. And even though the motivations may have changed, the custom remains, as do the lit candles in windows and the singing and dancing to celebrate the winter solstice.

That some introduced customs take hold, integrating with existing ones, while others take over, or fail to thrive at all, is mirrored in our living ecosystems. The merging of human cultures across the world has seen non-native species of plant and animal take root in landscapes where they wouldn’t naturally be found, usually as the result of travel and trade.

For the most part, they rub along together quite well, portioning out places to live and access to water and nutrients, resisting the pressures of hungry predators through various chemical and physical defence mechanisms, and living and dying without too much impact on each other or on us.

Occasionally though, some of the interlopers take liberties. Instead of sharing resources, they want the lot, and proceed to take over and engulf native species, crowding them out and killing them off. Plants like Rhododendron ponticum – an ever-green understorey shrub that was introduced from the Iberian Peninsula – not only takes over and shades out native plants, but it has poisons in its tissues which can be lethal to native animals. And it’s not just plants. Grey squirrels, sika deer, zebra mussels and Asian clams are all introduced trouble-makers.

This isn’t just happening in Ireland. Some of the same species are becoming prevalent worldwide, causing concern among scientists of what’s known as “global ecological homogenisation”. Some argue that a similar homogeneity has overtaken our cultures and our languages, and that the ancient diversity therein is being lost to the “McDonaldsisation” of the modern world. We’re losing diversity and what’s emerging in its place is an overall sense of sameness.

At Christmas, we come together and reflect on the things that bind us. Those traditions might be old, like holly and ivy on our wreaths, or new, like watching re-runs of your favourite Christmas movie. Some might be common across the majority of households, like decorating the tree, and others unique, like eating baked ham for breakfast on Christmas morning. But however we choose to enjoy the festive season, it’s reassuring to have a sense of where our customs come from and to know that, whatever else changes in the world, some things – despite unrelenting protests for excited children – are worth preserving.