Drilling the seabed for answers to Earth’s mysteries 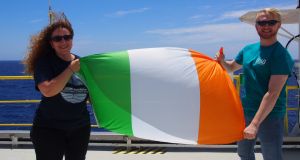 Sometimes when you want answers, you have to go digging. Or maybe drilling deep below the seabed. Two researchers have swapped dry land in Ireland for the ocean near New Zealand to understand more about sub-sea “landslides” and slow earthquakes.

Dr Aggie Georgiopoulou and Dr David McNamara are on board the JOIDES Resolution, a drill ship that can take long cores from the seabed, as part of the International Ocean Discovery Programme (IODP) which carries out research to understand how the planet works.

With the support of the Geological Survey Ireland and their host institutions, the researchers set out as part of IODP Expedition 372.

“This is an epic journey I’m on and it’s unlike any others I’ve been on before,” says Georgiopoulou, a lecturer in sedimentology at University College Dublin’s School of Earth Sciences.

“One of the objectives of the expedition is looking at submarine landslide processes, and this is my area of research. What is remarkable about these landslides here in New Zealand, the Tuaheni Landslide Complex, is that they seem to be slowly creeping instead of catastrophically collapsing and moving like avalanches on the seafloor.”

The creeping seems to be due to the presence of gas hydrates – like ice, only formed by methane and other gases, not water, Georgiopoulou says – and she wants to gather evidence by drilling 200 metres below the seafloor and collecting sediments from the base of the slides.

“[I want to figure out] whether what we consider large landslides are indeed as large as we think, or merely made up of smaller events,” she says. “Submarine landslides can cause tsunamis, so the implications are that instead of having one big wave from a large landslide you have several smaller waves.”

While Georgiopoulou has been on many marine expeditions, Expedition 372 is the first time McNamara has been at sea for more than about an hour, but he quickly found his sea-legs. The lecturer in structural geology with the Earth and Ocean Sciences Discipline at NUI Galway wanted to better understand the tectonic aspects of the region.

“New Zealand is located on a subduction zone where the Pacific plate is being forced down and under the north island,” McNamara says. “As part of this IODP expedition we will be lowering down tools that make various measurements about the rock as it is being drilled through.”

He will analyse underground structures such as faults and fractures to better understand the types of earthquake that happen in the region.

“These slow-slip earthquakes, or ‘silent earthquakes’ have been recorded in New Zealand since 2002, taking place roughly every two years,” McNamara says. These events happen over a period of time, usually about two weeks.

The international team on Expedition 372 have been getting into the festive spirit with Christmas trees and even a ‘fireplace’ with a fake flame on a monitor, and Georgiopoulou has been relishing the chance to look not only to the seabed but also to the stars visible from the southern hemisphere.

“I’m quite familiar with the constellations in the northern hemisphere,” she says, “but it’s the first time for me to see these stars in their full glory and they are beautiful.”