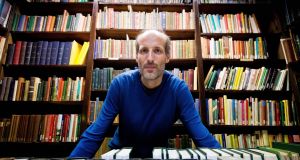 Maths at school level continues to have a perception problem, according to one of the world’s leading mathematicians.

A variety of factors may contribute to this but one problem he identifies is results-oriented teaching: you have an exam at the end of the year, you train your kids to do well, their results are compared to other schools, “and therefore, there’s not so much incentive towards getting people to like the subject”.

To remedy this, he suggests going back to an earlier phase in the education cycle and getting younger pupils to like the subject before the demands of exams kick in.

The Austrian was speaking in Dublin in advance of delivering the 2018 Hamilton Lecture, an annual talk in honour of noted Irish mathematician William Rowan Hamilton. It was a highlight of Maths Week Ireland which runs until October 21st.

Hairer has led advances in the field of stochastic partial differential equations (SPDEs) by providing a toolkit for addressing problems previously thought to be inaccessible. His work is in stochastic analysis, a part of mathematics concerned with random processes.

In 2014 he was awarded the Fields Medal for his outstanding contributions to the theory of SPDEs. The prize is awarded every four years to a handful of mathematicians under 40, and is considered one of the top prizes in the field.

One of the consequences of winning the Fields Medal is – much like Nobel Prize winners – a sudden transformation from respected researcher in a specialised area to celebrity; in this instance within the global mathematics community. It’s a status that seems to sit comfortably with Hairer.

Asked about the standing of maths in the world, he does not have the impression that many people are aware of its importance in everyday technology, such as the smartphone.

He is extremely worried about a trend towards politicising every question and suggested answer – without applying any value to expert thinking, and discounting it as being part of a political agenda. The problem is evident in the sciences generally, he adds.

Maths may be still somewhat removed from this, though statistics is not. As a consequence, he believes, “the public is losing trust in expert opinion; in some sense ‘your guess is as good as mine . . . you may have thought about this for 20 years, and I have thought about it for five seconds’.”

The application of advanced maths to “coin tosses, atoms and forest fires” was the theme of his lecture, hosted by the Royal Irish Academy in Dublin and supported by The Irish Times and Arup. Young mathematicians at third level benefited from a master class from Hairer earlier in the day.

Another example described by such equations is the microscopic properties of magnets. We are used to thinking of bar magnets as having a north and south pole, but at microscopic scales, all of the grains have different directions. When the magnet is heated to a certain point, the magnetism is lost. Just before that temperature, though, the whole magnet’s field is weaker, and it exhibits strong random fluctuations.

When it comes to tossing a coin, the principles of symmetry apply in the first instance; “if you flip a coin it’s essentially symmetric between head or tails, and therefore the probability that it comes up heads has to be same as coming up tails”.

“But there are more subtle situations where your intuition can lead you astray,” he explains, and so there are dangers of making conclusions using a mathematical model and inferring reality. It leads to declarations that “mathematics tells us that’s the way it is” – and can result in dishonesty, or an honest mistake.

When it comes to atoms and forest fires, it’s universality that applies; they may be random in their movement but can be modelled by random matrices and so prediction is possible.

ICL is embarking on a joint project with France’s National Centre for Scientific Research (CNRS), which will see the setting up of a major maths laboratory in London. It will serve as a hub for collaboration between French and UK maths communities. Hairer was glad to note it will be “one of the few things not affected by Brexit”.