Food archaeology goes back to our roots

US professor suggests that by re-connecting with the food of our ancestors, we can also build a more sustainable food system with fewer risks of allergies and food intolerances 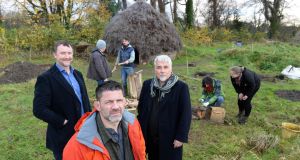 I’m sitting on a large log in a reconstructed early medieval roundhouse in the middle of suburban Dublin. There’s a fire burning in the middle of the chimney-less structure, built out of coppiced hazel and a thatched heather roof.

Brendan O’Neill, deputy director of the Centre for Experimental Archaeology and Material Culture (CEAMC) at University College Dublin sits across from me explaining how students of archaeology learn about ancient materials, tools and structures by making them from scratch on this one-acre site at the south end of the UCD campus.

“It’s the only land on the campus that has been un-tilled and un-built on. It was an arable field which belonged to the Roebuck Estate which UCD was built on,” explains O’Neill. Smelling the smoke and sitting in a semi-dark space seems a bit surreal but O’Neill explains that the best way to understand how people lived is to spend time in a reconstructed round house like the one I’m sitting in. He argues that the best way to identify the presence of iron tools in an archaeological excavation is to build your own tools from iron fragments found in Irish bogs and flint sourced on Irish beaches. And, the best way to understand what the remains of ancient ceramics would look like is to make your own pottery from scratch.

Bill Schindler, an associate professor at the Department of Anthropology at Washington College in Maryland, US, is on a sabbatical year at the School of Experimental Archaeology at UCD. He has developed an approach to teaching students that takes the idea of experimental learning several steps further. As director of the Eastern Shore Food Lab in the United States, Schindler brings his students foraging for food, introduces them to farmers and teaches them how to build fires from flint, butcher wild animals (usually deer) with stone tools, cure meats and make their own sourdough bread, cheeses and fermented drinks.

Schindler also partook in the Great Human Race, National Geographic Channel 2016 series in which he and anthropologist Cat Bigney spent eight days in each of 10 different time periods, surviving only on the foods and tools available at that time. “It was the most immersive education I’ve ever had,” says Schindler of the television series that took him from Tanzania to the west coast of America.

Living with his family on Airfield Farm in Dundrum for the 2017/2018 academic year, Schindler is working with students and chefs. “I’m interested in our dietary past and engaging students in immersive food acquisition. Eighty per cent of our processed foods boast about what they don’t have, which is the exact opposite to seeking out nutrient dense foods which I’m interested in,” says Schindler who was amazed that some third-level students in the United States had never cracked hen eggs or sat by an open fire before attending his classes.

This immersive approach to teaching and research in his Food, People and The Planet lecture series, he calls “Soul Authorship”. “The students are the authors of their own experiences and are 100 per cent engaged in what they are doing,” he explains.

O’Sullivan explains how food, cooking and culture is one of three research strands at the UCD Centre for Experimental Archaeology and Material Culture. The others are houses and living conditions and materials and their transformation. “There is a wave of [academic ]interest in experimental archaeology around the world at the moment, partly because of its link with craft and the fact that in a digital world, we are losing touch with our senses. Archaeology brings a unique perspective to human experience because it is the only discipline that focuses on the full span of human existence through the things we use,” says O’Sullivan.

Jason O’Brien’s interest in the Food Evolutions project stems from his desire to take Irish chefs away from the daily grind of the kitchen to re-connect with the ancient origins of food. “By bringing chefs to sit around a fire in this early medieval roundhouse, we can re-imagine the direction we can take with food by understanding our past in a practical sense,” says O’Brien. One of Odaios Foods initiatives is the Roundstone Bakehouse which bakes bread using ancient grains and long-fermented sourdough baking techniques used thousands of years ago.

Bill Schindler suggests that by re-connecting with the food of our ancestors, we can also build a more sustainable food system with fewer risks of allergies and food intolerances. Speaking specifically about animal protein, Schindler says that in early agrarian societies, humans ate so much more of the animals they slaughtered.

“The problem nowadays is that we are so disassociated from the food we eat,” he adds. “We need to be more in tune with all aspects of the way we interact with animals for food. In the past, people ate the organs, fats, blood and brains of animals which are the most nutritionally dense parts. We could start to address ethics, economics and sustainability of eating animal protein by using more of the animal thus needing fewer animals to feed us.”

He also suggests that just as sourdough bread (in which some of the grains are pre-digested through the fermentation process, thus making gluten intolerance much less likely) has nothing in common with packaged white sliced bread and that raw milk and raw milk cheeses (which he postulates doesn’t create a lactose intolerance) are a completely different food from pasteurised, homogenised fat-free milk. “Our bodies respond completely differently to these foods and I would argue that human beings benefit both nutritionally and in terms of digestion process from the foods our ancestors ate.”

And, in terms of future food sustainability, Schindler believes eating insects will be on the menu. “It’s hard to tell exactly from an archaeological point of view when insects came into the human diet but most indigenous groups still eat insects. They are very nutritionally dense and should be part of our diet moving forwards.” So, what should we start on? “Roasted crickets are currently grown organically for human consumption. They are almost like eating crisps.”

UCD Centre for Experimental Archaeology and Material Culture is a world first in terms of being a specifically designed outdoor on campus facility to study and experiment with ancient housing, materials and foods used in ancient times, according to Prof Aidan O’Sullivan.

“From this research, we can get a much better sense of the full range of foods people ate. Animal bones were traditionally used to define what people ate but we know now through research into ancient grains that people in Ireland ate mostly barley and oats rather than wheat,” adds Prof O’Sullivan director of UCD School of Experimental Archaeology and a board member of EXARC, the global network of archaeological open-air museums and experimental archaeology.

Dr Jessica Smyth, Assistant Professor at UCD School of Archaeology, and her colleagues use lipid analysis of ancient pottery to understand better what foods they held and her research has been key to understanding the origins of dairying across Europe.

“This research has discovered that we’ve been using dairy since the Neolithic times where previously, it was thought dairy was introduced in the sixth century AD. And interestingly, Ireland had the highest consumption of dairy 3,500 years BC – and we now have the lowest lactose intolerances throughout Europe,” O’Sullivan says.