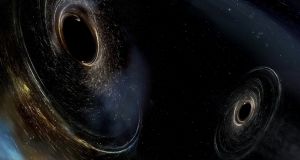 An artist’s rendering showing two merging black holes similar to those detected by Laser Interferometer Gravitational-wave Observatory (Ligo): In this latest event, a black hole 19 times the mass of the sun and another black hole 31 times the sun’s mass, married to make a single hole of 49 solar masses. Illustration: Caltech/MIT/Ligo Laboratory

The void is rocking and rolling with invisible cataclysms. Astronomers said Thursday that they had felt space-time vibrations known as gravitational waves from the merger of a pair of mammoth black holes resulting in a pit of infinitely deep darkness weighing as much as 49 suns, some 3 billion light-years from here.

This is the third black-hole smashup that astronomers have detected since they started keeping watch on the cosmos back in September 2015, with Ligo, the Laser Interferometer Gravitational-Wave Observatory. In less than two short years, the observatory has wrought twin revolutions. It validated Einstein’s long-standing prediction that space-time can shake like a bowlful of jelly when massive objects swing their weight around, and it has put astronomers on intimate terms with the most extreme objects in his cosmic zoo and the ones so far doing the shaking: massive black holes.

“We are moving in a substantial way away from novelty towards where we can seriously say we are developing black-hole astronomy,” said David Shoemaker, a physicist at the Massachusetts Institute of Technology and spokesman for the Ligo Scientific Collaboration, an international network of about 1,000 astronomers and physicists who use the Ligo data.

“We’re starting to fill in the mass spectrum of black holes in the universe,” said David Reitze, director of the Ligo Laboratory, a group headquartered at Caltech that built and run the observatory. In the latest Ligo event, a black hole 19 times the mass of the sun and another black hole 31 times the sun’s mass, married to make a single hole of 49 solar masses. During the last frantic moments of the merger, they were shedding more energy in the form of gravitational waves than all the stars in the observable universe.

After a journey lasting 3 billion years, that is to say, a quarter of the age of the universe, those waves started jiggling Ligo’s mirrors back and forth by a fraction of an atomic diameter 20 times a second. The pitch rose to 180 cycles per second in about a tenth of a second before cutting off.

Upon further analysis the signal proved to be a perfect chirp, as predicted by Einstein’s equations. Because of the merger’s great distance, the Ligo scientists were able to verify that different frequencies of gravity waves all travel at the same speed, presumably the speed of light. As Mr Reitze said, “Once again Einstein triumphs.”