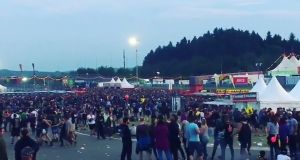 The Rock am Ring festival in Germany was cleared out on its opening night after Koblenz police said they had received information of a “concrete threat”.

Organisers posted on the festival website that “due to a terrorist threat the police have advised us to interrupt the festival”.

Der Spiegel magazine said that all those attending were asked to leave the concert and head to nearby camping grounds “in a controlled and orderly fashion”.

Some 90,000 were expected by the end of the weekend at the annual three-day event outside the western town of Nurburg.

The German band Rammstein was due to be last night’s headline act.

Festival organisers say they hope to be able to go ahead with the programme on Saturday.

Last year, the final day of Rock am Ring was cancelled after lightning strikes injured 80 people, some seriously.