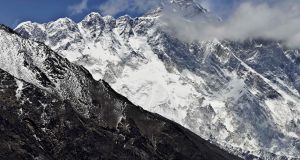 Mount Everest is seen from the village of Tembuche, in Nepal. File photograph: Roberto Schmidt/AFP/Getty Images

Mountaineers have confirmed that a famous rocky outcrop near the peak of Mount Everest has collapsed, potentially making climbing the mountain more dangerous.

The Hillary Step, named after Edmund Hillary, who, along with the sherpa Tenzing Norgay, was the first person to climb the mountain in 1953, may have been destroyed during the 2015 Nepal earthquake.

The 12m-high rocky outcrop was a nearly vertical climb on the southeast ridge of the mountain.

There had been rumours from climbers on earlier expeditions that the step had been destroyed, but snowy conditions had made it difficult to confirm.

British expedition leader Tim Mosedale, who reached the summit last week, posted a photograph on Facebook and confirmed the destruction of the Hillary Step.

“It’s official - the Hillary Step is no more,” wrote Mosedale.

“It was reported last year, and indeed I climbed it last year, but we weren’t sure for certain that ‘the Step’ had gone because the area was blasted with snow. This year, however, I can report that the chunk of rock named the Hillary Step is definitely not there any more.”

Reports of the step’s destruction began circulating last year due to photographs published by the American Himalayan Foundation. However, snow cover in the pictures made it difficult to say the section had definitely collapsed.

Mosedale, who reached Everest’s summit for the sixth time on May 16th, posted a photograph of what remains of the Hillary Step when he returned to base camp after the climb.

The image shows the mountain’s topography has changed significantly when compared with photographs taken a few years ago.

Located at 8,790m, the Hillary Step was a steep and narrow section considered by climbers to be the last obstacle before the summit, which is at 8,848m.

Its destruction may make the ascent easier - as the climb will no longer involve scaling a vertical rock - or more dangerous - as there may now be limited paths up that part of the mountain, which would mean that climbers would have to wait for long periods in cold temperatures and at a high altitude while others attempted to reach the peak.

“It’s easier going up the snow slope and indeed for inexperienced climbers and mountaineers there’s less ‘climbing’ to be done, making it much easier for them,” Mosedale told Planet Mountain.

“However, it’s going to form a bottleneck.”