With Italy no longer in US focus, Russia swoops to fill the void 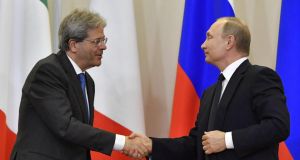 President Donald Trump made the most of his short time in Italy. He was treated to a private audience with the pope, met both the country’s president and its prime minister in Rome, flew to Sicily for a summit of world leaders and visited US troops at a nearby naval air station.

But as the sudden burst of diplomatic activity subsided with his departure, European and US officials fear a return to the new normal of American inattention as the administration struggles with political turmoil and Russia-related scandals back home.

All the while Russia is assiduously courting Italy, a country that once had the largest communist party outside the Soviet bloc and that many analysts consider the soft underbelly of the European Union. In Rome Trump left behind an embassy without an ambassador and forfeited a geopolitical playing field that Moscow’s ambassador in Rome, Sergei Razov, is exploiting.

A deliberate, gray-haired career diplomat, Razov has been plugging away at building relationships with Italian politicians, organising concerts for Italy’s earthquake survivors and visiting Italian regional officials who lament the “unfair” sanctions on Russia – which Moscow dearly wants lifted.

Next month Razov will offer a sumptuous buffet when he hosts the annual Russia Day celebration amid the dripping chandeliers, coffered ceilings and gilded interiors of his Villa Abamelek residence. Like Razov’s energetic diplomacy, much of Russia’s relationship building is being done in plain sight, as when President Vladimir Putin hosted Prime Minister Paolo Gentiloni this month in Sochi, and President Sergio Mattarella a few weeks before that in Moscow.

But there is a fear among Italian, European and US officials that Russia is also using the same kind of behind-the-scenes influence and news-media obfuscation it has employed in the United States and elsewhere, creating a tilt in Italy towards Moscow.

The former prime minister Matteo Renzi complained privately to his counterparts about Russian meddling in his country’s politics by supporting anti-establishment parties. And websites controlled by a leader of the Five Star Movement, one of Italy’s most popular anti-establishment parties, have spread reports published on Sputnik Italia, an Italian version of the Russian state-funded news operation.

Russia “has invested a lot in influencing public opinion in this country,” said Celia Kuningas-Saagpakk, the Estonian ambassador to Italy. She previously worked in her country’s foreign ministry, where she covered Russia and monitored its strategies and propaganda tactics in Ukraine and elsewhere.

The effects of Russian attempts to influence Italy can already be seen. Long shaky, Italian politicians across the spectrum, ever mindful of business ties and energy deals, are wobbling more than ever on the hard line the European Union has taken towards Moscow since its land grab in Ukraine in 2014.

The enforcer of that tough-minded approach has been Chancellor Angela Merkel of Germany, who has acted as Europe’s main liaison with Russia. But the erosion of her relationship with Putin over Russia’s meddling in Ukraine has created a breach that many in Italy hope their country will step into.

Italy’s many Russia enthusiasts are heartened by the recent visit of Gentiloni. His predecessor, Renzi, visited Putin at the St Petersburg International Economic Forum last year and said he opposed the “automatic” renewal of sanctions on Russia.

The most consequential warming to Russia has come from the surging Five Star Movement, which leads in the polls as Italy faces the prospect of elections late this year

The reanimated former prime minister Silvio Berlusconi, who once wore matching furry hats with Putin, said last month that he hoped sanctions would soon be lifted, too. But the most consequential warming to Russia has come from the surging Five Star Movement, which now leads in the polls as Italy faces the prospect of elections late this year.

The Five Star Movement has called for a referendum on Italy’s inclusion in the euro zone, an end to sanctions on Russia and a de facto geopolitical shift away from the United States and towards Russia. At a recent unveiling of their foreign-policy platform in parliament, Five Star Movement leaders depicted Russia as a strategic partner that had been unfairly punished, and the United States as an abusive ally whose 70-year relationship with Italy had run its course.

“There’s a limit,” Manlio Di Stefano, head of the Five Star Movement’s foreign-affairs committee, said about Italy’s post-second World War alliance with the United States. Di Stefano said he had met Razov, who declined an interview for this article.

Soon after Trump’s election Beppe Grillo, a founder and leader of the Five Star Movement, and many members of the party celebrated his victory as a finger in the establishment’s eye, and party leaders expressed approval of Trump’s kind words about Putin.

Grillo sat with the mayor of Rome and other leading party members, applauding speakers who have promoted conspiracy theories about the CIA as they cheered the WikiLeaks founder Julian Assange from the stage.

Alessandro Di Battista, a Five Star leader, said the era of Italian subservience to the United States was over

On the sideline Alessandro Di Battista, a party leader, said the era of Italian subservience to the United States was over. His party, he said, would seek to move Italy away from the United States and toward Russia “to a more equidistant point” once it came to power.

Some US and European officials see Putin’s invisible hand in the shifting allegiances. “We are aware that Putin is trying to weaken the EU and the institutions,” the Republican senator Bob Corker, chairman of the US Senate’s foreign-relations committee, said in an interview. “He’s done the same thing in Italy and other places.” – (New York Times)