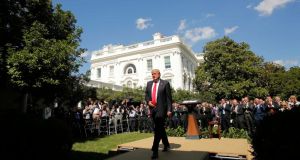 The United States’ allies have condemned Donald Trump’s decision to withdraw from the Paris Agreement, warning that the global climate accord cannot be renegotiated.

The reverberations of the US president’s announcement on Thursday were felt across the world yesterday, with German chancellor Angela Merkel leading the charge. In unusually outspoken remarks, delivering several digs at Mr Trump, she called his decision “extremely regrettable, and that’s putting it mildly”. She said, “We need this Paris Agreement to protect creation, and nothing can or will hold us back.”

The priority, according to Ms Merkel, was for the other signatories to renew their commitment to the “indispensable” climate agreement and address the challenge of global warming.

She said she was “moved and enthused” by the number of groups, countries and companies, “above all in the US”, that had vowed to stand by the accord. “This decision cannot and will not hold back those of use who feel obliged to protect our earth,” Ms Merkel said in a brief statement in Berlin. “To all who care about the future of our planet, I say: let us continue together, so that we are successful for our Mother Earth. ”

Her sentiments were echoed by leaders across Europe. Although the United Kingdom did not sign a joint statement issued by the French, German and Italian leaders late on Thursday, Prime Minister Theresa May is understood to have expressed her disappointment in a phone call with the US president.

China, the world’s biggest polluter, also expressed its continued commitment to the accord, which Mr Trump has said advantages countries such as China and India at the expense of the United States.

Speaking after a summit with the Chinese leader Xi Jinping in Brussels, the European Council’s president, Donald Tusk, said: “We are convinced that yesterday’s decision by the United States to leave the Paris Agreement is a big mistake . . . The fight against climate change, and all the research, innovation and technological progress it will bring, will continue, with or without the US.”

As country after country lined up to support the deal negotiated in December 2015, one notable exception was Russia. President Vladimir Putin refused to condemn the US decision at an event in St Petersburg, saying that he would not judge the US president and questioning whether countries were in a position to halt climate change through the nonbinding agreement.

Mr Trump, who used Twitter throughout the day on Friday to retweet endorsements of his decision, was also facing a growing backlash domestically, with a number of states vowing to continue to abide by the principles of the Paris Agreement. The governors of up to 10 states and dozens of mayors publicly criticised the US president’s decision to pull out of the accord, which was signed by 197 countries in 2015 and has been ratified by 147.

One World Trade Center, in New York, and Boston City Hall were among well-known buildings illuminated in green, an expression of defiance by some of the United States’ biggest cities against Mr Trump’s decision.

Speaking in the White House on Friday, the head of the Environmental Protection Agency, Scott Pruitt, who has been a vehement opponent of the Paris accord, declined to confirm if Mr Trump believed that climate change was a hoax.

Mr Pruitt defended the decision to pull out. “It was a failed deal to begin with,” he said, adding: “Even if all targets were met . . . it only reduced the temperature by less than two-tenths of one degree.”