An unintended bias in the Citizens’ Assembly

That’s Maths: Why do 10 counties have no members among the 99 people who were selected? 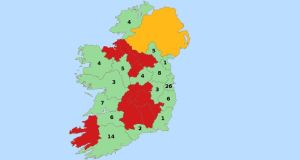 The country was divided into 22 areas, each with a known number of voters

Recently, the Government established the Citizens’ Assembly, a body of 99 citizens that will consider a number of constitutional issues. The assembly meets this Saturday to continue its deliberations on the Eighth Amendment to the Constitution, which concerns the ban on abortion. It will report to the Oireachtas on this issue in June.

A list is available on the official website (citizens assembly.ie), giving the names and counties of the members. A reader of That’s Maths has observed that a significant number of counties are absent from this list. Of the 26 counties of the Republic, there are assembly members from just 16, with none from the remaining 10 counties.

As this seemed surprising, I asked my colleagues in UCD’s school of mathematics and statistics, Nial Friel and Alan Benson, if they could estimate the probability of the observed assembly membership arising, assuming the selection process was truly random; that is, if the probability of choosing someone from each county were proportional to the number of voters in that county.

Sixteen on, six off

Since the boundaries of the parliamentary constituencies do not all coincide with county boundaries, the country was divided into 22 areas, each with a known number of voters. These closely correspond to counties or pairs of counties: the latter Carlow-Kilkenny, Cavan-Monaghan, Longford- Westmeath and Sligo-Leitrim. Among the selected assembly members, 16 areas are represented and six are not. The six “missing areas” include 10 counties, as shown on the map.

The outcome of simple random sampling is modelled by a probability distribution called the multivariate hypergeometric distribution. By repeatedly selecting 99 voters randomly from the electorate, an ensemble of “virtual assemblies” is generated. This is called Monte-Carlo simulation, reflecting the crucial role of chance in the procedure. The ensemble of assemblies is then analysed to estimate the probability of the spread of assembly members actually observed.

To give everyone an equal chance, 99 voters were sampled randomly from the 3.3 million electors. Then each was mapped to an area and the number of areas was recorded. The UCD statisticians generated one million sets of 99 members. From these, the probability distribution of the number of “missing areas” was calculated.

It must be stressed that the method described here is not that used by Red C Research, which is explained in part in a document on the assembly website. Red C incorporated constraints to ensure gender balance and spread among socio- economic groups. They appear to have employed a hybrid method with a random component but including systematic aspects in the interests of balance.

Notwithstanding this, the absence of representatives from so many counties does point towards an unintended bias.