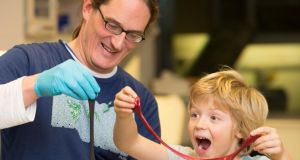 Jonathan Coleman holding a piece of G-Putty while his son Oisin holds a piece of Silly Putty. Photograph: Naoise Culhane.

A research team has merged advanced science with a popular children’s toy to discover a new kind of sensor sensitive enough to detect the footsteps of a small spider.

The sensor, a blend of thin carbon sheets and the children’s novelty Silly Putty, is just the latest use for this one atom thick form of carbon called graphene.

The team wasn’t expecting to end up with a sensor hundreds of times more sensitive than existing versions. Now they have the makings of a new kind of wearable medical device.

“What we are excited about is the unexpected behaviour we found when we added graphene to the [putty] , a cross-linked polysilicone,” said Prof Jonathan Coleman, an investigator in the Trinity College Dublin based Amber advanced materials research centre and a professor of chemical physics in the school of physics.

One of his graduate students thought it might be interesting to blend the putty and graphene to see what might emerge.

“It turned out when he made the stuff it had extremely unusual properties,” said Prof Coleman. “I knew that we were on to to something exciting.”

The putty can be stretched but quickly returns to its original shape. It normally will not conduct electricity but this changes when the graphene is added to form “G-putty”.

“The student was measuring the electrical properties and discovered that the slightest touch would change the electrical resistance,” said Prof Coleman who collaborated on the research with Prof Robert Young of the University of Manchester.

The new sensor is hundreds of times more sensitive that a typical sensor, he said. Details of the research were published on Thursday in the journal Science.

“Sensors have a sensitivity factor and the standard is about two. Our material has a factor of 500. Even if you had only a factor of 10 this is really a step change in this technology.”

They successfully tested its potential by applied the “G-putty” to the chest and neck of people to monitor breathing, pulse and blood pressure.

The G-putty was so sensitive it was able to detect small spiders walking across a sample.

“The behaviour we found with G-putty has not been found in any other composite material. This unique discovery will open up major possibilities in sensor manufacturing worldwide,” he said.

“It is one of those things you can’t plan for with this kind of research. This is what comes out of basic research.”