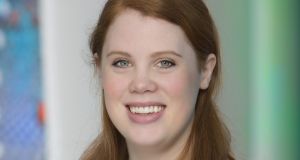 Niamh Kavanagh: “We want [the internet] to work efficiently so we can keep watching those cat videos without interruption!”

Your work aims to make the Internet run more efficiently, can you explain how?

The backbone of the Internet is a physical network of optical fibres that connect different regions, and light brings information along the fibres. I look at how we could use hollow optical fibres rather than solid ones, which could carry more information and transmit it faster.

What would that mean for Internet users?

It would mean that large amounts of data could move more quickly between centres, and if companies invested in them it could leave more space on regular optical fibre for other users. As people and devices use the Internet more and more, we need to keep a step ahead. It all comes back to that physical network – we want it to work efficiently so we can keep watching those cat videos without interruption!

How did you become interested in the science of light?

When I was studying undergraduate physics in University College Cork, I was on holidays with my family in Spain and we saw a “magic fountain” show with lights. That sparked my interest in how light travels, and to research for a presentation on it I visited Tyndall National Institute. I was so impressed with the place that I applied to do a PhD here with Dr Fatima Gunning, supported by the Irish Research Council.

You won awards for science communication in 2016, including FameLab Ireland and the Institute of Physics Early Career Physics Communicator Award for Ireland and the UK. How did that come about?

I volunteered with Science Foundation Ireland’s Smart Future’s programmes to give talks at schools to show students how interesting physics can be.

Then I entered FameLab, where you have a few minutes to present on something about science, and the first time I went onstage into the spotlight I blanked.

But I kept practising and I came second in Thesis in 3, then I won the national finals of FameLab 2016 in Ireland and I presented at the Cheltenham Science Festival. Presenting opens up a lot of opportunities and I have been making a lot of friends along the way too.

What are the big challenges for scientists to communicate their work, and have you any tips?

When you are talking to a general audience about something you have been studying for years it is like trying to explain a plot in your favourite soap opera to someone who doesn’t know how the characters interact or what has gone on in the past. You have to step back and think about how to engage them.

What do you like to do when you are not working on your PhD or telling the world about science?

I like crafts and reading – my Kindle is the best thing I have – and trawling the Internet to hear new bands. I was sporty in school and I have a black belt in Taekwon-Do and lately I have been getting back into the gym. I also stilt-walk with the Buí Bolg street performance group.

Wait, what? You are a stilt-walker?

Yes my brother and I learned stilt-walking at a youth club in Wexford when we were teenagers. We take part in performances and parades a couple of times a year. It’s fun and different.