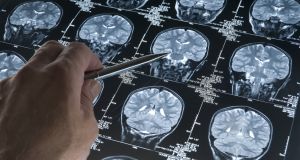 Controlling brainwaves using a flickering LED light may provide a way to halt and then reverse the changes that occur in the brains of Alzheimer’s patients.

Those with the degenerative disease have an accumulation of a protein called amyloid-B in their brain tissues which can build up as plaque.

Researchers at the Massachusetts Institute of Technology (MIT) showed they could halt overproduction of amyloid-B and reduce the amount of amyloid plaque just by controlling brainwave activity.

One group of brainwaves called gamma waves are known to be important in perception, memory and attention, all of which are impaired in Alzheimer’s said Li-Huei Tsai, professor of neuroscience at MIT.

Previous studies had shown that gamma waves are disrupted in a number of neurological diseases including Alzheimer’s.

Prof Tsai led a research group at MIT that wanted to see if restoring normal gamma wave activity could have an impact on the disease. The researchers described their findings on Wednesday evening in the journal Nature.

The team first used an invasive technique on mice which involved stimulating deep brain tissues using light. It restored normal gamma wave activity in a region of the brain known to be involved in memory.

This reduced amyloid-B production but also switched on the brain’s immune system which cleared amyloid-B from the memory-related brain region.

The implantation of brain probes was considered too invasive however so the team developed a simpler non-invasive approach, a flickering LED light.

They found that after an hour amyloid-B was reduced in the parts of the brain involved in vision, said lead author, Hannah Iaccarino, formerly at MIT but now with Georgia Tech.

They also extended the treatment over a seven day period and found that amyloid plaques were reduced.

The approach showed promise but it remained unknown whether removal of amyloid would reduce or clear the symptoms of Alzheimer’s the research team said.

“We think a lot more work has to be done to investigate whether we can spread the effect to larger brain regions,” said Prof Tsai.

We were some way off using this for new treatments, said Dr Mark Dallas of the University of Reading. “Importantly, we are still no clearer if this modulation of amyloid beta will provide cognitive benefits to patients.”

While there are no immediate implications for people who are living with dementia, the study might deliver “a spark for new avenues of research to further explore the relationship between rhythms of electrical activity in the brain and Alzheimer’s disease”, said Dr Doug Brown, director of research at the UK Alzheimer’s Society.