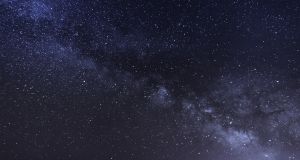 Astronomers based in the UK and Ireland have watched the weather change on a planet 1,000 light years distant. File photograph: iStock

Talking about the weather is something of a national pastime, but thanks to a group of astronomers we can now also talk about weather on planets orbiting stars billions of kilometres away.

Astronomers based in the UK and Ireland have watched the weather change on a planet 1,000 light years distant.

Clouds came and went as the gas giant planet orbited its star which was about twice as large as our sun.

This is the first time that astronomers have identified direct evidence for weather on an exoplanet, said Dr Ernst de Mooij of the School of Physical Sciences at Dublin City University.

There have been “hints of weather on exoplanets”, he said, for example strong winds, but these were inconclusive.

This latest research published in Nature Astronomy came from a team led by Dr David Armstrong of the University of Warwick, Dr de Mooij, then based at Queen’s University Belfast and now DCU, and academics at University College London.

Exoplanet hunters use light coming from distant stars to find these planets using data provided by the orbiting Kepler satellite launched by Nasa for this very purpose.

The light from the star dims very slightly as the planet passes between us and the star, and watching this over time allows astronomers to build up a picture of what the planet is like.

Dr Armstrong’s team took this search to the extreme, looking at light from the star measured every 60 seconds over several years, Dr de Mooij said.

These varied depending on whether the face seen was during morning or evening, he said. “There was a shift between them and the only way we can explain it is clouds. Clouds are very reflective and the variation gave us the clue that what we were looking at was weather.”

The planet, 40 per cent bigger than our solar system neighbour Jupiter, is extremely hot reaching 2,600 degrees when facing its star. But it cools when the evening comes allowing clouds to form.

These evaporate quickly when the daytime heat returns but the team could watch the cloud cover change, seen as particularly bright spots on the planet.

Public health doctors set to ballot for strike action over pay and contracts 01:37
Most face masks to protect against coronavirus do not meet standards 01:20
UCD medical students withhold fees in protest at fee increases 01:00
Tidy Towns cancellation: ‘The town is the worse for it’ 01:00
Minister tells coursing organisation to release captured hares 01:00