Chemotherapy drug locked in sugar molecule, which opens when it finds tumour cells 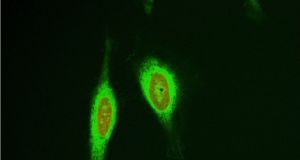 Scientists in Dublin have found a way to deliver toxic “smart bombs” to cancer cells, killing them off while leaving healthy tissue alone.

The method is extremely specific, attacking only cancerous cells. It should also work on any form of cancer, say the researchers from the Trinity Biomedical Sciences Institute.

The method involves using a form of sugar molecule that locks up the toxic chemotherapy drug, allowing it to move around the bloodstream without harming healthy cells.

The package snaps open, however, when the smart bomb encounters tumour cells, causing them to take up the toxin and die off.

This new kind of chemo does not react to normal cells, said Prof Eoin Scanlan, assistant professor of organic and medicinal chemistry in Trinity’s school of chemistry.

“It is inactive until it is near a tumour. A healthy person could take this and nothing would happen,” he said. “We are using the sugar as a way to protect the body from the drug.”

The key that opens the lock comes from the tumour itself, a class of naturally occurring biochemicals called glycosidases.

Tumour tissue releases large amounts of these substances and when the smart bomb detects them the toxin is released.

“The active compound is then rapidly taken up by cancer cells,” Prof Scanlon said.

Their method has another advantage, being able to locate where the tumour cells are growing in the body. “They are fluorescent and we have used that to image the cancer cells,” he said.

They will build the same kind of sugar trap to hold it and prevent damage to healthy tissues.

Details of the work involving Prof Scanlon and Institute colleagues is published in the journal Chemical Communications, and is supported by funding from Science Foundation Ireland.