Q&A: Interwoven elements behind choice of Supreme Court judge and rifts around him 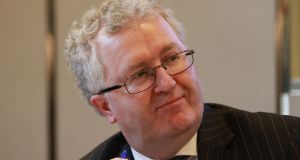 Where do things stand between the Supreme Court and its newest member?

Uneasily. Chief Justice Frank Clarke has said he will not list Séamus Woulfe to sit as a Supreme Court judge until February of next year. However, it is hard to see how the court can function coherently then, given the scale of the rift between Mr Justice Woulfe and his colleagues. But for now at least, the Woulfe controversy is in the political domain.

What are the politicians doing?

Opposition leaders met the leaders of the Government parties last Friday, but there was no sign of any consensus on how to move forward. There is a great reluctance among many politicians – on all sides – to begin a process of impeachment.

Many politicians seem to think Mr Justice Woulfe should resign, but very few think he should be impeached. Any TD can put down a motion of impeachment under article 35, and that may yet happen. But there appears to be insufficient support for a vote in favour of allowing an impeachment process to get under way.

So like the court itself, the Oireachtas is unsure of what to do next.

What does the Government do now?

The Government is seeking to achieve some sort of consensus between all the parties on what to do – but it is also facing calls to explain the process which led to the appointment of Mr Justice Woulfe in the first place.

Last week, The Irish Times reported that at least three sitting judges had expressed an interest in the position – a fact which was not relayed to either Taoiseach Micheál Martin or Green Party leader Eamon Ryan in advance of their assent to the appointment. Opposition parties want Minister for Justice Helen McEntee to come into the Dáil and answer questions on the issue, but the Government is resisting this.

Why the controversy over this?

McEntee brought one name to Cabinet for appointment – that of Mr Justice Woulfe, telling colleagues his was the only name to come through the Judicial Appointments Advisory Board (JAAB). A few weeks earlier – before the formation of the new government and therefore before McEntee’s appointment as minister for justice – then taoiseach Leo Varadkar had told Martin and Ryan that one name (Woulfe’s) had come through the JAAB process and that his appointment would be brought to Cabinet. But neither Varadkar nor McEntee told colleagues about the other judges’ expressions of interest in the job.

Does the attorney general have an automatic right to a job as a judge?

No. However, many holders of the office have in the past succeeded to judicial office and a convention developed that the attorney general had “right of refusal” on judicial appointments during his term. But this practice had lapsed until it was revived by Harry Whelehan in 1994, when the government – in fractious circumstances which would lead to the collapse of the Fianna Fáil-Labour administration – appointed him as president of the High Court.

In fact, on the three occasions when the direct promotion of the attorney general to the bench took place in the last 30 years – the appointments of Whelehan, Maire Whelan and Woulfe – it has led to significant political controversy.

Woulfe is only the third attorney general since 1950 to go directly to the Supreme Court.

Is the appointment a separate political issue to the rift between Woulfe and his colleagues?

Separate but related. The Opposition want to probe the appointment of Mr Justice Woulfe by the Government in the first place, but they also say they will co-operate with the Government in seeking to reach a consensus on what to do about the rift between the judge and his colleagues.

Either way, at a time when the EU-UK negotiations on Brexit are heading towards a decisive stage and Ministers are considering how Ireland should exit the Covid restrictions in two weeks’ time, judicial matters are going to command much political attention this week.