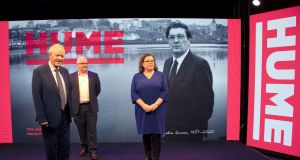 Foundation chair Prof Seán Farren, with Tim Attwood, secretary to the foundation, and board member Dawn Purvis, at The John and Pat Hume Foundation launch at Niavac studio in Belfast. Photograph: Kevin Cooper/Photoline

A foundation to commemorate the legacy of Nobel Peace Prize winner John Hume and his wife was launched on Friday in a virtual ceremony.

The Humes’ son, John jnr, revealed that among the foundation’s plans are a John and Pat Hume peace prize, which he said would be community-based.

“It recognises the work the work that John and Pat did on the ground, supporting those people, the quiet peacemakers,” he said, “so we will be scoping that out in due course.”

The foundation will be based in the Humes’ home city of Derry and aims to use the principles that motivated them to “inspire the next generation of peacemakers”.

“The values and ideals of partnership, reconciliation, inclusion and social justice that John and Pat embraced throughout their lives can help support our young people to navigate the profound challenges of their time,” said the chair of the foundation, Prof Sean Farren.

The foundation’s first event, a lecture on leadership for peaceful change by Martin Luther King III, will take place on November 19th, and future launch events are planned for Dublin, Brussels and Washington.

The foundation’s patrons include former president Mary McAleese and former US senator George Mitchell, who chaired the talks which led to the Belfast Agreement, and among its board members are Sara Canning, the partner of the murdered journalist, Lyra McKee.

“Growing up in Derry, I have seen first hand the effect that peaceful leadership that both John and Pat Hume has had,” Ms Canning said at the launch.

“While bombs fell and bullets flew, they steadily worked on ways to empower people to improve opportunities, foster healing and reconciliation, to embrace diversity and to level the playing field for all.

“Empowerment and encouragement of our young leaders is vital,” she said, “and it’s something this foundation will contribute to enormously, both here at home and throughout the wider world.”