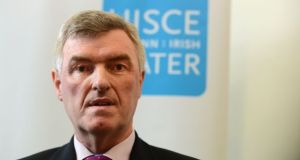 John Tierney was paid a €200,000 annual salary when he was appointed to Irish Water in 2013 on a three-year contract.

The former Dublin City manager, who worked in local government for 36 years before joining Irish Water, was paid a €200,000 annual salary when he was appointed by minister for the environment Phil Hogan in January 2013 on a three-year contract.

At the time of his retirement, Irish Water said that Mr Tierney would have been entitled to a similar package upon retirement from the local authority. However Mr Tierney has not been able to secure his full entitlements because of a need for legislation to allow the payment to be made.

Speaking on RTÉ radio’s This Week programme on Sunday, Mr Harris said the delay was a “technical and legal matter”, relating to the pension trust of Irish Water’s parent company Ervia.

“The idea was anyone who moved from the local government sector to Irish Water should never be worse off as a result of that move. They obviously have contractual entitlements. It does require an amendment to the pension trust deed of Ervia and I understand that’s ongoing ,” Mr Harris said.

He said he felt “very inappropriate” in discussing Mr Tierney’s pension, but said he could be assured the Government would fulfil its obligations to him.

“I can say very clearly the Government will fulfil absolutely its obligations in ensuring any employee of the State in any agency gets their full pension entitlement in accordance with the law.”

In a statement Irish Water said the issue was being addressed.

“The cost of Mr. Tierney’s pension has been provided for in the Irish Water accounts. An amendment is required to the Ervia Pension Trust Deed in order to enable full payment of Mr Tierney’s pension in line with his contract provisions. This matter is being addressed between Ervia and the Department and Mr Tierney has been updated by Ervia regarding this process.”