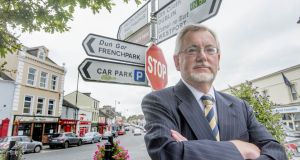 Declan O’Callaghan, who is facing suspension by the High Court. Photograph: Brenda Fitzsimons

The wife of a Ballaghaderreen solicitor facing suspension by the High Court has resigned as the local Fianna Fáil director of organisation.

Declan O’Callaghan agreed last month to a number of orders before the High Court, including not to practice as a solicitor, pending the outcome of an inquiry by the Solicitors Disciplinary Tribunal.

Mr O’Callaghan will also pay €350,000 from his personal funds by September 10th to the client account of the firm where he was a partner – Kilrane O’Callaghan Solicitors, Pound Street, Ballaghaderreen, Co Roscommon – and will cease his involvement with that firm.

As well as working as the office manager of her husband’s firm, Ms O’Callaghan was also Fianna Fáil’s director of organisation for the Roscommon-Galway constituency.

It was expected that her resignation from the position would be announced at a party meeting on Thursday night in the Abbey Hotel in Roscommon. However Ms Devine O’Callaghan did not attend the meeting and there was some confusion among members about her status.

Senior party officials later confirmed she had informed Fianna Fáil headquarters of her resignation from the post, which includes, among other things, responsibility for organising general election and local election campaigns.

Her replacement will be nominated in the coming weeks by the members of the local constituency organising committee, which was elected on Thursday.

Ms Devine O’Callaghan told the party she was resigning the post “for personal reasons”, sources said. She could not be reached for comment on Friday.

The decision was widely expected among party members in the aftermath of the controversy surrounding her husband.

Until recently, Ms Devine O’Callaghan was also one of Fianna Fáil’s two honorary national treasurers, but she has now left that position. She has also served as a member of the Fianna Fáil Ard Chomhairle, its national executive.

The Law Society of Ireland had initiated an application for suspension of Mr O’Callaghan arising from concerns raised in an independent solicitor’s report, including his having withdrawn substantial fees from the estate of a bereaved child.

The independent solicitor expressed the opinion the €344,000 fees and costs charged to the estate bore no relation to the work done and that there was dishonesty involved.

Mr O’Callaghan has also been ordered to provide the High Court with an explanation for his deduction of €101,000 fees from a €396,000 estate held for a widowed client and her three children.