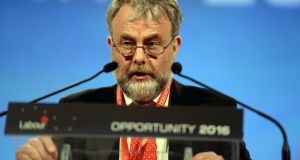 Jack O’Connor said the issue of who leads Labour could be explored once a wider discussion had been concluded. Photograph: Cyril Byrne / THE IRISH TIMES

The issue of who leads Labour can be revisited once the party holds a full debate on how it can renew itself and social democracy in general, party chairman Jack O’Connor has said.

Mr O’Connor, who is a general election candidate for Labour in Wicklow and was president of Siptu until last Christmas, said a full discussion on the general approach of the left was first needed.

In the absence of such a debate, talk about the leadership was “superficial”, but Mr O’Connor said the issue of who leads Labour could be explored once a wider discussion had been concluded.

This could happen once a special conference has considered a review of Labour’s general approach.

The intervention from one of the labour movement’s most senior figures follows a number of councillors calling for Brendan Howlin to stand aside.

In a memo sent to all Labour elected representatives, the party’s political director Nat O’Connor gave pointers on how to deal with questions about the leadership.

Mr O’Connor said the calls for a leadership contest are a “suggestion that the party should operate outside of its own constitution and rules, which would set a dangerous precedent that would undermine any future leader”.

Only a motion of no confidence in supported by a two thirds majority at the party’s central council could lead to a contest, he said.

“At present, there is no suggestion of such a motion being proposed, much less supported by two-thirds of the party’s central council.”

Another councillor and general election candidate, Dublin Rathdown’s Lettie McCarthy, has also said that Mr Howlin should bring forward a debate on the leadership of the party.

Ms McCarthy, a Dún Laoghaire councillor, declined to say that Mr Howlin should resign but said the discussion should be held to “clear the decks, get it out of the way”.

Party officials have told councillors that any concerns they have could be discussed at a pre-Dáil think-in in Drogheda on September 16th and 17th.

Mr Howlin rang Ms Genockey after she made her public statement this week. According to sources, the Wexford TD expressed his concern that she had not contacted him in advance before making her position public.

However, 16 other councillors have said they “do not feel this is the right time for a change” at the top of the party.

Jack O’Connor – who is known to have opposed the party strategy at the last general election and argued for a different approach to its decision to stay out of government after the election – said a wider debate was needed before the leadership was discussed.

“We need to have a debate about the renewal of the values of the Labour Party and social democracy today and, in that regard, the strategy which democratic socialists and social democrats should follow,” he told The Irish Times.

“Unless that takes place, a superficial discussion about which individual leads the party is absolutely pointless.

“If we were to establish structures and a framework to conduct that serious debate and if we were to bring that to a proper conclusion – a debate which would be overseen by independent people from the social democratic family – and to publish a proper report, perhaps to be considered at a special conference. Then, after all that, you could revisit the issue of who leads the party.”

“I hope Brendan will hold that meeting soon, and let’s all deal with the issue there. I think if that is the view of a certain number of councillors, which it seems that it is, then it should be discussed. We need to have that discussion.”