FF calls for Office of President to be subject to FOI

Fianna Fáil says it will consider legislation in September 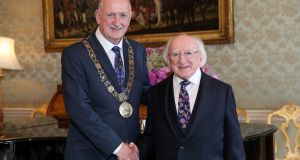 Michael D Higgins and Niall Ring, the Lord Mayor of Dublin: The Office of President does not fall under the remit of the Freedom of Information Act 2014 but receives significant public funding. Photograph: Maxwell Photography

Fianna Fáil is to consider tabling legislation to extend the Freedom of Information Act to the Office of President.

The party spokesman on transport, Robert Troy, has said it will examine the issue in September but believes the highest office in the land should not be exempt from the legislation.

Mr Troy said transparency must be applicable to the “greatest and most senior office holder in the State” and he will publish legislation to push for such change.

The Office of President does not fall under the remit of the Freedom of Information Act 2014 but receives significant public funding. It is estimated to be in the region of €30 million over the past seven years.

Questions have been raised in recent days about the travel costs for President Michael D Higgins and whether such should be published.

Mr Higgins is not responsible for booking or arranging his travel as this falls under the remit of the Department of Foreign Affairs and Trade.

Presidential hopefuls Gavin Duffy and Pádraig O’Ceidigh have called for FOI to be extended to the office and Fianna Fáil has now backed those calls.

The Public Accounts Committee (Pac) is also to assess this issue at a meeting in September and discuss whether it can scrutinise the working costs of Áras an Uachtaráin.

Meanwhile, Fianna Fáil has said it is at the discretion of local authorities to nominate a presidential candidate if they so wish but insisted there would be no party candidate.

Éamon Ó Cuív has so far refused to comment on calls from some Fianna Fáil members for him to stand as the party candidate against Mr Higgins.

However, it is understood he wants to reopen Micheál Martin’s decision not to stand a presidential candidate.

Party figures said Mr Ó Cuív, a Galway West TD, was present at both party meetings where the issue was discussed and did not dissent from the decision to support Mr Higgins.

Speaking at Leinster House yesterday, Mr Troy said: “A decision has been taken. We are a parliamentary party. We are a democratic party.

“The decision was taken by the front bench. It was referred to the parliamentary party and there was a decision taken that we would not contest the presidential election.

“I’m told that Eamon Ó Cuív was at both meetings and at no stage did he voice the opinion that he would like to be a contestant.

“From our perspective it is quite clear in the rules of the Fianna Fáil organisation that it is a matter for the parliamentary party to decide about contesting the presidential election.

“That discussion has taken place and a decision has been arrived at and we won’t be revisiting it.”

Four possible candidates are to appear before Carlow County Council today to seek its support for their campaign.

However, the council is unlikely to decide who to support, if it supports anyone, until next month.