NI constituency profile: Alliance and SDLP fight it out for third seat 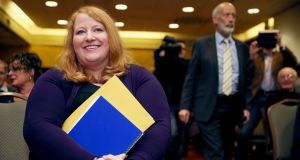 Granted a reprieve by Theresa May’s inability to pass the withdrawal agreement at Westminster, the Northern parties are instead now fighting a campaign to retain or gain European Parliament seats in a contest they expected to have been made extinct by Brexit.

How long will the North’s new MEPs sit? None of them know. They may never take their seats, if May can pass the withdrawal agreement through parliament before the start of July; in fact, if she can get the deal passed in the coming weeks, the elections may not take place at all. Few things attest to the chaotic management of Brexit more than the confused electoral prospects. But few of them will bet on the prime minister’s success. Nobody would.

So two of the sitting MEPs – Diane Dodds of the DUP and Martina Anderson of Sinn Féin – are seeking re-election, though with predictably different attitudes to the contest. Long-time sitting Ulster Unionist Party MEP Jim Nicholson, who occupies the North’s third seat, is retiring and the party is running the former Stormont minister Danny Kennedy.

Nicholson was the last remaining member of a trio that included the late Ian Paisley and John Hume who represented the North in Brussels and Strasbourg for many years. His retirement will put the UUP on the back foot as it tries to hold the North’s third seat. The DUP and Sinn Féin seats are almost certainly safe but the last seat will be keenly contested by Kennedy, the SDLP leader Colum Eastwood, Jim Allister of the Traditional Unionist Voice party and Naomi Long of the Alliance.

Last time out in 2014, Sinn Féin’s Anderson topped the poll with more than 25 per cent of the vote, winning on the first count with almost 160,000 votes. She can afford to drop a lot of votes and still be re-elected.

Dodds came second with just under 21 per cent of the vote and had to wait until the elimination of Allister to put her over the quota. Her surplus in turn pulled Nicholson over the line. But such a productive – from a unionist perspective – order of elimination cannot be guaranteed this time. If the SDLP can take some Sinn Féin votes and stay ahead of the Alliance – which transferred heavily to the party last time – it could be in a position to pip a weaker UUP candidate.

That could work the other way, too, of course. The Alliance – whose leader and candidate Long was the most popular politician in the North in a recent poll – could stay in the race and benefit from an SDLP elimination. Either way, the SDLP and the Alliance represent a clear and present danger to the UUP seat.

Once Thursday’s local elections are out of the way, the European contest will move centre stage in the North’s politics, running parallel to the all-party talks on reviving the power-sharing institutions which are due to begin next week.