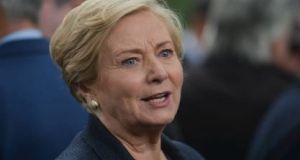 Frances Fitzgerald: she quit just hours before a Fianna Fáil motion of no confidence in her would have brought the Government down

A majority of voters also believe Ms Fitzgerald should have resigned sooner than she did.

The controversy over Ms Fitzgerald’s handling of the case of Garda whistleblower Maurice McCabe and her knowledge about the Garda’s attempts to discredit his evidence at a commission of inquiry brought the Government to the brink of collapse a fortnight ago.

It was only brought to a conclusion when Ms Fitzgerald resigned, though the former tánaiste and her party continue to insist that she has done nothing wrong. Mr Varadkar has suggested that she will return to politics at the highest level once the Charleton Tribunal has considered the issues.

Asked if the controversy was handled better by Mr Varadkar or by Mr Martin, 31 per cent of voters opted for Mr Martin, while just 23 per cent said Mr Varadkar had performed better. Just under a third (32 per cent) said neither, while 14 per cent expressed no opinion.

Supporters of Fine Gael believed Mr Varadkar handled the affair better than Mr Martin, but all other voters believed the Fianna Fáil leader performed better throughout the controversy.

A large majority of voters believe that the former tánaiste should have resigned sooner than she did. Ms Fitzgerald quit just hours before a Fianna Fáil motion of no confidence in her would have brought the Government down and precipitated a Christmas general election.

Her resignation came after a week in which the controversy dominated the news and the work of Government.

Even among Fine Gael voters, a majority of respondents to the poll (53 per cent) said Ms Fitzgerald should have gone sooner. Fewer than one in five (18 per cent) of Fine Gael voters believed that the former tánaiste should not have resigned.

Despite the negative findings for Mr Varadkar and Ms Fitzgerald, Fine Gael surged to its highest poll rating for several years, as reported by The Irish Times last week. Mr Varadkar’s personal ratings were also very high, a performance potentially boosted by the Brexit controversy.

The poll was conducted on Monday and Tuesday of last week among a representative sample of 1,200 voters aged 18 and over in face-to-face interviews at 100 sampling points in all constituencies. The margin of error is plus or minus 2.8 per cent.