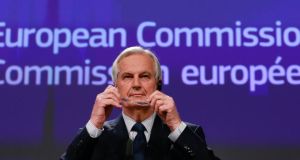 European Union Brexit negotiators in Brussels have expressed doubts about the feasibility of the UK’s no-hard-border offer. In a commentary written for this week’s summit on the progress of negotiations, the Brexit task force under Michel Barnier suggested the United Kingdom’s determination to leave the single market and customs union makes its promise of regulatory alignment between the EU and the whole of the UK difficult to achieve.

The UK has maintained it can obviate the need for borders on the island of Ireland or in the Irish Sea by reaching a free-trade agreement with the EU that would see continued alignment between the EU and UK. But the task force stated: “This intention seems hard to reconcile with the United Kingdom’s communicated decision to leave the internal market and the customs union.”

In the absence of such a trade deal the UK has promised to maintain full alignment with those rules of the internal market and customs union that, now or in the future, support north-south cooperation, the all-island economy and the protection of the Belfast Agreement.

The commission paper explained why Barnier’s team recommends that the summit acknowledge “sufficient progress” and allow talks to begin on transition arrangements and the future relationship. It also explained that in that fallback position on Ireland, in the absence of an EU-UK deal, new “implementation and oversight mechanisms for the specific arrangements to be found will be established to safeguard the integrity of the internal market”.

The task force warned that many of the commitments entered into by the UK now “will need to be translated into workable, practical solutions in the second phase of the negotiations” and made the case that the work needs to be continued “ in a distinct strand of negotiations”. It added: “The commission considers this issue to be of utmost importance.”

The report also recorded a pledge by the commission to provide in its next budget for its continued commitment to cross-Border funding programmes, notably the Peace and Interreg schemes.

A deal reached by European Union and British negotiating teams on Friday set out guarantees that there will be no hard border between the Republic and Northern Ireland when the UK leaves the EU, in March 2019.

A previous agreement had been reached on Monday, guaranteeing “regulatory alignment” between the Republic and Northern Ireland. This deal broke down following opposition from the DUP, which props up the Tory government led by Theresa May.