Miriam Lord: Speculation on Kenny seat on menu at GAA lunch in Shelbourne 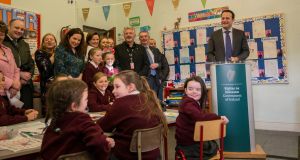 Fine Gael’s future in the post-Enda era was much discussed at the Mayo GAA senior players’ inaugural Christmas lunch in the Shelbourne Hotel.

The ballroom was jammed yesterday “with half the county, half of Dublin and half of London” at a fund-raiser for the 2017 team’s foreign holiday. “Sure we had to go. December 8th is the culchies’ day out,” said our source close to Manulla Junction.

After 41 years of Enda in situ, his Dáil seat is up for grabs at the next general election and a line-up of Grand National proportions is jockeying for position ahead of the selection convention early next year.

The former taoiseach and party leader delivered the opening address at the lunch and he was followed by Alan Dillon, the Mayo stalwart who recently announced his retirement from intercounty football. And as soon as he hung up his boots, Dillon threw his hat into the ring and said he would be seeking a nomination to run for Fine Gael. He is a party member and has expressed his admiration for Enda in the past.

But Enda, we hear, had been quietly pushing for his former adviser Jack O’Donnell to enter the race. When news broke of Dillon’s declaration, he wasn’t best pleased to be blindsided by a solo run.

O’Donnell, meanwhile, is now part of housing minister Eoghan Murphy’s close-knit advisory team. When asked if he was considering a tilt he replied: “Absolutely not, despite people putting pressure on me to run.”

The Castlebar man said his “immediate focus remains on the challenge in housing” and wished Dillon, and anybody else who puts their name forward, the very best.

Paddy has been very visible around the constituency of late, while we understand his Christmas card requirements have been greatly expanded this year

Another possible GAA contender in Mayo is footballer Barry Moran, whose name has also been mentioned. His teammate Andy Moran recently ruled himself out of the running.

Another possible candidate is Donal Vaughan – the shoe king of Mayo, who has branches in Castlebar, Claremorris and Ballinrobe and famously fitted Enda for his election shoes.

Missing from the line-up at yesterday’s lunch was former cathaoirleach of the Seanad Paddy Burke. The senator is a wily operator and is playing his cards very close to his chest. He is also under pressure locally to declare his intentions but he’s saying nothing.

However, Paddy has been very visible around the constituency of late, while we understand his Christmas card requirements have been greatly expanded this year.

“If you see the commissioner around Castlebar for a few days in the near future there’ll definitely be something going down,” says our source near Manulla Junction, hinting that Big Phil Hogan may be leaning in Burke’s direction.

Fine Gael is pushing to take a third seat in the Mayo four seater, where Senator Michelle Mulherrin is also in the mix. However, Fianna Fáil TDs Dara Calleary and Lisa Chambers might have something to say about that, while Sinn Féin senator Rose Conway is an impressive performer in the Upper House.

At the senior team’s GAA Christmas lunch – no namby-pamby turkey for the lads, it was prime steak all the way – one of the prizes was dinner for four in Leinster House with Calleary.

When it was announced, a voice from the hall shouted: “If I win, do I have to go?”

Leo is no mug.

He’s going to finish his first Dáil session at Taoiseach on a very high note following a few traumatic weeks when it looked like his inexperience in the job might be his undoing.

After this major success in the phase one European Union negotiations, what was the big talking point to emerge from it? (If you want trivia, you’ll have to read Fintan. We deal with the big stuff here.)

It was Leo’s mug. No, not his face (which Fine Gaelers would be more than happy to see on the posters if an election were called in the morning), but the ceramic one he won’t be pictured putting in the dishwasher any time soon, if his handlers have any sense.

There he was, photographed sitting around a table with Tánaiste Simon Coveney and Minister of State for Europe Helen McEntee as the trio prepared for their press conference on the EU’s agreement with the UK and Leo’s sterling defence of the Irish border.

And in front of him was The Mug.

Do those elves in his strategic communications unit ever rest? Is there ever a time when they aren’t trying to scatter their magic Twitter-dust over the Taoiseach and everything he touches?

Not only that, but he already has a special mug. The Mister Men one, which features nice “Mr Taoiseach”.

It’s getting a bit much.

Except that the mugs have nothing to do with curating a narrative for the current occupant of the Taoiseach’s chair.

“Mr Taoiseach” came with the job. That particular mug was presented to Enda Kenny, who kept it in his office and then bequeathed it to his successor.

The “World’s Best Taoiseach” one was a very recent a gift from the fifth- and sixth-year members of the student council from Luttrellstown Community College after they were given a guided tour of Leinster House and Government Buildings by their local TD, Leo Varadkar.

The visitors really enjoyed the Dáil proceedings and asked to go back into the chamber to continue hearing some of the debates. Their trip was organised by principal Fionnuala Ní Chaisil, teacher Oide Mahony and the student council.

They also brought some socks.

But then, who doesn’t?

We sense the beginning of a collection or two.

Taoiseach a picture of conviviality in National Gallery

On Thursday night, as the Brexit negotiations were intensifying in Brussels, the Taoiseach brought his Fine Gael cabinet colleagues out for a Christmas dinner before the Dáil rises at the end of next week.

It was a very convivial evening, in the agreeable confines of the newly-restored National Gallery, and Leo thanked everyone for their hard work in recent months. Everyone was in good form, buoyed by Thursday morning’s opinion poll results in The Irish Times.

Simon Coveney was there. Despite having duelled for the leadership earlier this year, Simon and Leo worked very well together on the Government’s impressive Brexit strategy.

Minister of State for Defence Paul Kehoe came under fire in the chamber when his absence was noted before the Dáil voted in favour of Ireland joining European defence organisation Pesco.

Kehoe, it transpired, was attending his niece’s wedding in Wexford. He also missed Leo’s soiree.

Also absent for the vote was Independent Alliance Minister of State Finian McGrath, who vehemently opposed the move when he was in opposition. He was unavoidably detained on business.

At Cabinet a number of weeks ago, when the Pesco memo was up for consideration, Kehoe and McGrath had an argument about the proposal. Afterwards, in the corridor, the Dublin Bay North TD whistled at his fellow Minister of State as if he were a dog. “Here Pesco! C’mon Pesco!”

To which Kehoe retorted: “And I’ve a cat called Nato too.”

We don’t know if Shane Ross was disappointed not to attend the gig in the gallery, because he had a lovely Christmas gift for Leo – a Mickey Mouse. He won it on Sunday at the Christmas fair in St Patrick’s national school in Glencullen.

Maybe it was for the best, because by Thursday the Taoiseach was well on his way to becoming the hero of the hour with his strong defence of Ireland’s Border in the face of Britain’s Brexit blowhards. Nothing Mickey Mouse about his efforts.

“He’s been cool as a cucumber all week – nothing fazes him” said one backbencher, high on the opinion poll results. “He has a very relaxed style, says what he has to say and that’s it. Oh, very approachable.”

Given their dip in the polls against Fine Gael’s rise, the Fianna Fáil mood wasn’t as buoyant

The poll meant Fine Gaelers were in great form at their Christmas media drinks on Wednesday night. The Taoiseach and Tánaiste dutifully turned up for the festivities in the Lincoln Inn, with Michael Noonan also putting in a rare appearance.

Fianna Fáil also held their media drinks on Wednesday night. They gathered in Kennedy’s pub just minutes down the road and delighted hacks shuttled from one watering hole to another, in free gargle nirvana.

Given their dip in the polls against Fine Gael’s rise, the Fianna Fáil mood wasn’t as buoyant. It didn’t help that a large continuity group – including Cork TDs Kevin O’Keefe and Margaret Murphy O’Mahony – decamped across the way to the Ginger Man, further depleting Fianna Fáil numbers.

While the Christmas tree lighting-up ceremony was happening on Tuesday evening outside Leinster House, a very nice little event was taking place inside in the warmth of the members’ restaurant, where Andrew Doyle, Minister of State for Food, was hosting a wine tasting.

Doyle sent an email to all Oireachtas members inviting them to sample the best of Wicklow Way Wines – Ireland’s first and only producer of wines made from Irish berries, such as strawberries and blackberries. The company has been shortlisted for a hatful of awards and now its wines are available in Leinster House.

The email sent by the Wicklow TD raised eyebrows among many of the politicians who received it. Some wondered if this meant they could use the facilities of Leinster House to showcase goods produced by companies in their constituencies.

However, the final paragraph from the junior minister caused the most concern.

“As Wicklow Way Wines are a small artisan producer,” he wrote, “they also request your assistance ‘to include us in the Intoxicating Liquor Bill (Breweries and Distilleries) 2016, in the same manner as breweries and distilleries. Our aim is to host tours of our winery as part of a broader Food and Drink Tour of Wicklow, which will be part of the offering under Ireland’s Ancient East.’”

One Opposition TD told us she was shocked by the email. “Is a Minister allowed to do this sort of lobbying in Leinster House? And then there’s the alcohol Bill. We’ve been under so much pressure, trying to get the bloody thing through the Oireachtas. And now wine tastings in the restaurant?”

This small company may have a valid point, but perhaps the Minister of State has been overenthusiastic in supporting a constituent.

Even if the strawberry wine is undeniably nice.