‘It was absolutely not a character reference for Séamus McGrane,’ says Éamon Ó Cuív 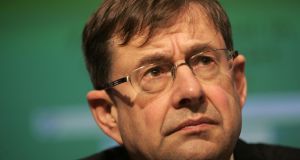 Fianna Fáil TD Éamon Ó Cuív has insisted he did not write a character reference for dissident republican leader Séamus McGrane, who was jailed on Thursday for directing terrorist activities.

A letter in Mr Ó Cuív’s name had been used in McGrane’s defence. It says the former minister is of the opinion that McGrane is “fully supportive” of his efforts to facilitate the peace process.

Speaking to The Irish Times, Mr Ó Cuív said he had written a draft statement supporting the work of a group called the Republican Network Unity.

He said this was in recognition of their attempts to back a move towards non-violent methods to promote their cause.

The statement was sent in draft format to McGrane’s solicitor, Mr Ó Cuív said. He insisted he was not aware it would be used in the court case until Thursday.

He told The Irish Times: “It was absolutely not a character reference for Séamus McGrane. I have only met Mr McGrane once.

“What I was supporting was the work of a group of dissidents, a group I had worked with for two years, in their attempts to move away from violence.”

The Fianna Fáil TD said he had been a part of process for over two years, which involved meeting republican prisoners in Maghaberry and Portlaoise.

The aim, he insisted, was to end any violence and this was the process he was referring to in the statement.

He added: “I believed that they were moving in another direction now and that I believed Séamus supported that process. I was not referring to the peace process.”

Mr Ó Cuív’s actions were called into question by Fine Gael TD Noel Rock, who alleged it was a “disgusting attempt by a TD to try and influence our courts”.

Mr Rock said it was “absolutely outrageous that Deputy Ó Cuív would send such a letter to the court”.

He added: “Deputy Ó Cuív claims that Mr McGrane was ‘fully supportive’ of his efforts to facilitate the peace process.

“Does Deputy Ó Cuív believe that planning to murder a member of the British royal family is supporting peace?

“Is he trying to show us that this terrorist who has convictions dating back to the 1970s was having a road to Damascus conversion? Who is Deputy Ó Cuív trying to fool here?”

Mr Ó Cuív said he would not respond to Mr Rock, claiming he did not know what he was talking about. The Fianna Fáil TD offered to meet the Fine Gael backbencher to explain his statement.

Mr Ó Cuív has previously been criticised for supporting the transfer of a convicted killer to an open prison.

Edward Griffin, who was jailed for eight years in 2009 for the manslaughter of criminal associate Patrick McCormack, wanted to be transferred from the high-security Midlands Prison to Shelton Abbey.