Verona Murphy to run in Wexford as an Independent 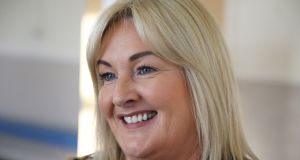 Verona Murphy has confirmed she will contest the next general election as an Independent candidate. Photograph Nick Bradshaw/The Irish Times

Former Fine Gael candidate Verona Murphy has confirmed she will contest the general election in Wexford as an independent candidate.

Ms Murphy said that having reflected on her byelection campaign and subsequent deselection from the Fine Gael ticket, he feels the time is right to run for Dáil Éireann as an independent.

Taoiseach Leo Varadkar is set to announce a date for the general election this week, with February 7th or St Valentine’s Day seen as the likeliest dates.

Ms Murphy was deselected as a Fine Gael general election candidate for Wexford before Christmas having become embroiled in controversy over comments she made about immigration during the recent campaign.

She suggested that some asylum seekers may have to be “deprogrammed” and that young children may be manipulated by terrorist group Islamic State.

“My time with Fine Gael is over, I have moved on,” Ms Murphy told the New Ross Standard on Tuesday.

“I am now an independent candidate. My brief experience with Fine Gael taught me a lot. I am now satisfied that life as an independent is the appropriate forum for me. It allows me to highlight without fear the issues which affect the people of Co Wexford. After all, politics is not about the politician. it’s about the people they represent.”

Ms Murphy came third in the byelection, having been in second place behind Fianna Fáil’s Malcolm Byrne by virtue of a strong 9,543 first preference vote - before being leapfrogged by Wexford Labour Mayor George Lawlor who secured a large number of transfers from Sinn Féin’s Johnny Mythen.

Ms Murphy, who is president of the Irish Road Haulage Association, said she would be campaigning on the potential for to develop the Rosslare Europort, the urban rural divide and to speak for voters in Wexford.

She said all of the main parties are limiting free speech.

“I have learned this first-hand. An independent politician is free to highlight any issues that affect the people of Wexford without fear. Wexford needs is a strong independent voice. I believe I have the skill set to do that job,” she said.

Ms Murphy said her falling out with Mr Varadkar and Fine Gael is in the past. “That campaign is over now. I am very resilient, and I am looking forward to the future.”

She addressed the Fine Gael party at a meeting in Enniscorthy last week at which she thanked the party for giving her an opportunity.

Speaking at an executive meeting of the party’s Wexford branch in the Riverside Park Hotel last Monday, Ms Murphy became emotional when outlining how her controversial comments were reported in the media in November.

A party member who attended the meeting said she never blamed anybody for her performance in the byelection.

Ms Murphy received a standing ovation and afterwards a heated 20 minute discussion took place about how she was treated by the party.

“It was a full and frank debate. A lot of people came out in favour of her and many said they weren’t happy about the party’s treatment of her,” a source said.

The executive committee tried to unify party members behind junior ministers Michael D’Arcy Jnr and Paul Kehoe ahead of what is expected to be a difficult general election campaign over the coming weeks, but a source within the party said there is strong support for Ms Murphy who is expected to get many Fine Gael votes in the upcoming election.

Speaking later on RTÉ radio’s Today with Séan O’Rourke show, Ms Murphy said the Government must insist Cherbourg significantly improves it security to stop illegal immigrants getting on board trucks if the ferry link with Rosslare is to continue.

Ms Murphy said Calais has spent €19m on fencing within the port, but that this has still not stopped illegals.

“The only port that carries security is Le Havre. It has its own police force - 130 police, they don’t have an issue with illegal migrants. The primary sufferers here are the people who are trying to do a day’s work. The drivers are suffering on the basis of not being able to carry out their work.”

“We have illegal migration, we don’t know anything about them, they are entering trailers illegally. They were provided with all the necessary requirements, but they absconded - why? It doesn’t work in any other country. I can’t go to any other country in the world without my proper visa or documentation and just say ‘look I’ll go stay with a friend.’

“Security is lax. There is no security particularly for one industry and we should be insisting at government level that this is addressed. I want legal migration. Illegal migration is absolutely heinous, we support refugees under the UN protocol and we are meeting our obligations, the problem is illegal migration.”