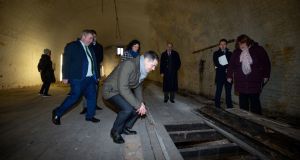 Minister of State for the Office of Public Works (OPW) Kevin “Boxer” Moran has said he will run as an Independent candidate in the imminent general election but not as a member of the Independent Alliance group.

Mr Moran said that if he is re-elected in Longford-Westmeath he may join a new political grouping in the new Dáil.

The Independent Alliance was set up principally by Minister for Transport Shane Ross before the last election and has been Fine Gael’s main coalition partner for the last four years.

Speaking at the Magazine Fort site in the Phoenix Park on Monday, Mr Moran did not rule out potentially rejoining the group if he is successful after the election. “We will hopefully see the Alliance up and running, or another alliance.

“I am running, effectively, as an Independent. At the moment it is about getting elected and then seeing can we form a group to support a government going into the future.

“I’d be hopeful we can bring in more people, and if it is not the Alliance and is another alliance, so be it,” he said.

Meanwhile, Independent Clare TD Dr Michael Harty has confirmed he will not seek re-election in the four-seat constituency at the general election.

“At the outset, as a leader of the No Doctor, No Village campaign, I committed to maintain general practice services in Kilmihil by putting in place a locum GP while taking my seat as an Independent TD,’’ Dr Harty said.

“Finding a full-time locum GP has proved increasingly difficult over the years. It is now not possible to fulfil both commitments. I have had to make a choice between seeking re-election or keeping my promise to my local community. I have chosen the latter,” he said.

Former Labour Party TD Michael McNamara is to run as an Independent candidate in the Clare constituency.

Mr McNamara left the Labour Party last year when Sheila Nunan was chosen ahead of him as the party’s candidate in the European elections in Ireland South. He told The Irish Times that his focus has “diverged significantly” from the Labour Party, which he said had become too Dublin-centric.

Mr O’Shea has been involved in Mr Wallace’s political team since he first ran for the Dáil in 2011, and most recently in his successful European Parliament election bid.

“All the candidates will be on the doors in the next few weeks promising everything. The only thing I can promise is I’ll be honest and straight up with people,” he said. Previously a publican, Mr O’Shea is based in Wexford town.

Councillor Duncan Smith is to contest the Dublin Fingal constituency for Labour after the party’s sitting TD Brendan Ryan announced he would not stand for re-election.

Meanwhile, former presidential candidate and businessman Peter Casey said he would run for election in Donegal as an Independent.

Mr Casey drew criticism during the 2018 presidential election for comments he made about Travellers and immigrants.

He said he did not agree with comments made during the November byelections by Fine Gael’s Verona Murphy about the alleged radicalisation of refugees, saying he thought the remarks were “baffling” and “inappropriate”.