February election could be a greater gamble for Varadkar 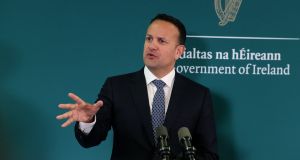 Taoiseach Leo Varadkar: Like all governments, this one underestimates the extent of its unpopularity among voters. Photograph: Brian Lawless/PA Wire

Despite the huffing and puffing of the rural independents, the edgy impatience of many Fine Gaelers and the cautious, menacing prowling of Micheál Martin, the decision remains Leo Varadkar’s. He is still master of his own destiny, at least in this regard. It may turn out to be the most important decision of his political life.

And it is, I think, a binary choice. In recent days and weeks, Varadkar has sought to convey the idea that he cannot get his creaking administration as far as May.

Not true, I think. If he agreed a date – or even a window; say, the first half of May – for an election with Micheál Martin in order to pass a few crucial Bills, including Richard Bruton’s climate change legislation, then I think it is hard to see independents bringing the Government down. In other words, Varadkar can decide whether he wants February or May.

Right now, it looks like February. The war drums are beating in Fine Gael and most Government sources and Cabinet Ministers to whom I have spoken on the subject in recent days believe he will go early: next week, with an election in early February.

That view is shared by Ministers, advisers and senior civil servants. They do not know for certain, so nor can we. The decision is ultimately a solitary one. But anything other than a February poll would surprise everyone.

High stakes. The history of timing of elections in Fine Gael is not a happy one. The Taoiseach should have gone to the country in the wake of the abortion referendum, and he knows it. A lack of boldness may be bearing on his decision now.

There are risks either way. This is a decision whose wisdom can only be properly judged in hindsight; and the Taoiseach, no more than the rest of us, has no crystal ball. He must judge, decide and then hope.

My view is that the greater gamble is to go early. Why? For three reasons principally.

Like all governments, this one underestimates the extent of its unpopularity among voters. Though many in Government pooh-pooh the idea, health and housing will be hugely important issues, at least in media coverage of the campaign, and that matters, especially in winter.

If it believes what it says, time is the Government’s friend on both issues. There is no guarantee that people will not be queued up on hospital trolleys in May. But there is less chance of it happening than in January.

I think Fine Gael also underestimates the extent to which the structure of the political debate changes once a campaign starts. In “peacetime”, the Government dominates political discourse.

Think about the politicians you hear on the radio or see on television; most of them are from the Government. Yes, they are often answering difficult questions. But they are getting the chance to put their message across in a way that opposition politicians have much less opportunity to do.

The election speculation is great fun for us political nerds. But my guess is that the rest of the country is largely unmoved by it

But when a campaign starts, that structural advantage ends. Fine Gael’s share of the broadcasting airtime will go from somewhere around 60-70 per cent to something more like the share of the vote the party received at the last election: a quarter. That’s a big change in its ability to talk to voters. The change in coverage in the newspapers will not be as dramatic, but it will be significant nonetheless.

The final point in support of delay is related. In the 1980s classic The Begrudger’s Guide to Irish Politics, Breandán Ó hEithir identified that many Irish elections were “put them out” elections. In modern political parlance, they would be called “change elections” – where the decisive public mood is to seek change in the composition and personality of their government.

Right now, this feels like a change election, a put them out election. Unless that changes, Fine Gael will lose power. It seems to me that Varadkar – along with Simon Coveney and Paschal Donohoe – stand a better chance of changing voters’ minds with three or four months of disciplined, dedicated campaigning and communication with all the advantages that government confers.

Against all these, of course, there are countervailing points. A February election allows Varadkar to seek credit for managing Brexit and reviving the Northern institutions. Micheál Martin prefers May, so, Fine Gaelers ask me, shouldn’t we want the opposite? And anyway the extra three or four months would be spent enduring the sniping of a hostile Dáil. I guess it’s a tight call either way.

There is also something very important to remember – the public finds all this much less fascinating than politicians and political correspondents do. The election speculation is great fun for us political nerds. But my guess is that the rest of the country is largely unmoved by it. One of the greatest insights a politician can have to understand just how little attention most voters pay to them.

I think voters will be more concerned about what the next government will do and what sort of difference it will make to their lives, rather than when the election is held. Those are the questions on which politicians should focus their minds.

Most voters regard elections as a pretty unwelcome intrusion, but a necessary evil: an opportunity to get their say on the priorities for the coming five years. Health? Housing? Climate change? The economy? Tax cuts? Now’s your chance.

Really, whether it comes in February or May doesn’t matter all that much. What matters is who gets a mandate from the country and for what. They’re coming to your doorstep before long. Decision time looms for the Taoiseach certainly; but for us all, too.

1 Taoiseach claims Sinn Féin not ‘a normal political party’
2 Who are Ireland’s 17 billionaires?
3 Man shot at in taxi claims bail conditions made him ‘sitting duck’
4 Yacht captain guilty of drunk sailing had ‘God given right’ to be on Liffey
5 My father in a nursing home wants to gift me his house
Real news has value SUBSCRIBE